Coulter Shrugs Off Rob Lowe Roast: Comedy Central is Moving Away From Comedy

Coulter Shrugs Off Rob Lowe Roast: Comedy Central is Moving Away From Comedy 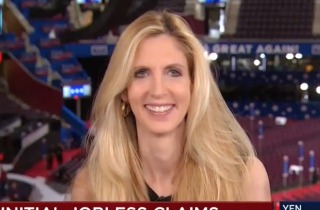 Ann Coulter is speaking out about the fact that she got burned the most during a Comedy Central roast that was supposed to be about Rob Lowe.

The conservative commentator ended up getting the most brutal jabs from her colleagues when they taped the roast on Saturday night. Hollywood Reporter caught up with Coulter in order to get her thoughts about why she was invited as a roaster, and how she felt about the more off-putting jokes made at her expense.

Coulter said she had no idea how the night became all about her, but that “it probably has something to do with Comedy Central’s corporate decision to move away from comedy.” Coulter went on to say that there weren’t any real “jokes” until she took the stage, and she said she paid no mind over Peyton Manning saying she looked like a horse, or the other roasters’ remarks about her dying.

“People are too thin-skinned. My only rule about a joke is that it should be funny,” Coulter said. “Nothing offends me. ‘Bored me’ is a different story.”

Coulter went on to say that she hasn’t spoken with Lowe about what happened, and that the media is butchering the jokes:

Is the press portraying this event properly, from your perspective?

I’m not sure, but I wish everyone could see the full roast, unedited. You guys at The Hollywood Reporter have pull. Can you get the unedited version and put it up online? Also: tip to reporters based on the Variety review. You ought to get these new things they have called “tape recorders” so you don’t murder peoples’ jokes with your crappy paraphrases.

Coulter added that “It’s invariably the has-beens and wanna-bes who think it’s a good career move to attack Ann Coulter. At least on Politically Incorrect, there would be just one has-been or wanna-be on the panel. This was an entire dais of ‘em.”