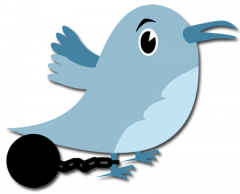 Donal Blaney, a conservative British blogger and lawyer, successfully convinced the UK’s High Court to allow him to serve a court injunction against a Twitter user that he claimed was harmfully impersonating him, @blaneysblarney, via Twitter. Unlike the US, the UK allows injunctions to be emailed, but a Twittered injunction is a legal first.

The firstness of this was duly noted by TIME, the BBC, The Guardian — and, not least of all, by Blaney himself, who blogged about how he suspected that “[his] readership today will be swelled by a number of visitors,” and by Griffin Law, the law firm that handled the matter, which promptly wrote a post titled “Griffin Law makes law by serving via Twitter.” Blaney is the sole principal of Griffin Law, though according to the site, barrister Matthew Richardson “devised and won the Blaney’s Blarney Order.”

A cynical question worth asking: was this a big, staged publicity stunt?

It’s impossible to tell, but here’s why it could be.

@blaneysblarney has just 133 followers and has written a grand total of ten essentially toothless posts, the first five of which were posted on September 17th. On September 18th, Donal_Blaney ‘planted a flag’ by Tweeting: “@blaneysblarney You’re not me: who are you? If you don’t delete this account & stop impersonating me I will report you to the authorities.” 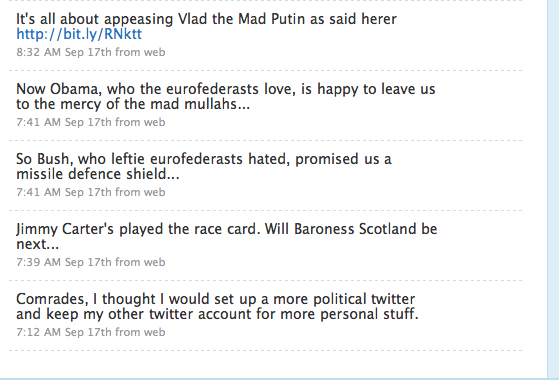 So how was the injunction served? Via Twitter, duh! Whatever that means. The injunction was supposedly served at 7:30pm BST last night, but it doesn’t appear in any Twitter search feeds for @Donal_Blaney (the real Donal Blaney) or @blaneysblarney. Donal_Blaney did tweet “Will @blaneysblarney now comply with the High Court order: http://bit.ly/3lRDWT“, but the bit.ly link went to… a blog post about how he was serving justice for all of the unfairly maligned, and would also get lots of traffic from this, coincidentally.

However, there maybe some flaws in the plan. For starters, you can only send a direct message on Twitter to someone who is already following you.

Mr Donal’s barrister, Matthew Richardson, did not appear aware of this until I informed him of this, but as the fake account was actually following him, he was able to immediately serve the order!

I emailed Mr. Blaney asking to see a copy of the injunction, and this was his response: “The order was served privately and is not for public consumption. I do not want to jeopardize my claim against the impersonator.” A lawyer contacted by Mediaite says there’s no compelling legal reason why releasing the injunction would jeopardize the claim, aside from the fear of annoying a judge, and given the publicity-craving way Blaney and Griffin Law have handled the matter thus far, if that was a fear, it’s likely happened already.

This is all entirely circumstantial; it’s very much possible that there is a malicious Twitterer who Donal Blaney swooped upon five Tweets and one day after he or she began posting, and that Blaney firmly believes that “The Blaney’s Blarney order is a huge step forward in preventing anonymous abuse of the internet. People have to learn that they can no longer hide behind the cloak of anonymity the internet provides and break the law with impunity,” as his barrister said in a statement.

But everything clicks together too smoothly. Though it has led to what could be an important precedent in social media law, it all feels a bit rehearsed. According to inthenews.co.uk, “The [Griffin] law firm has previously successfully prevented internet impersonation on Facebook and Blogger.”

It’s a pretty foolish maligner who would impersonate a very vocal lawyer whose firm deals with social media cases, get caught in a day, and not try all that hard at it. If that maligner does as Blaney fears and disappears from the Internet rather than reveal his or her identity, justice will be the worse for it.