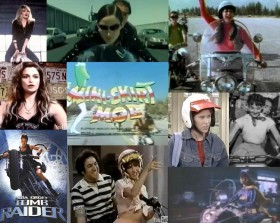 The SNL sketch “Biker Chick Chat” from last weekend’s season opener got a lot of attention thanks to newcomer Jenny Slate’s F-bomb. But what didn’t get attention: the frickin’ bikes, dude! Though they swore up a storm and had very impressive hair, I’m not convinced they could tell their Harley Davidson V-Rods from their Kawasaki Vulcan VN750s (or Vincent Black Lighting ’48s, for that matter). As it happens, we at Mediaite are totally into bike culture — as I’m sure you would have assumed — and we noticed the dearth of actual bike chat immediately, ’cause we’re good like that. But it’s also because we learned at an early age that bikes were C-O-O-L. As it happens, Biker Chicks are too — and here’s our pick of the best of ’em.

>>>FIRST UP: Trinity from The Matrix