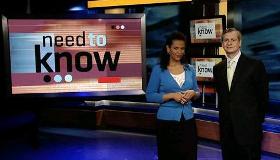 The new PBS show hosted by Newsweek Editor Jon Meacham and NPR’s Allison Stewart, Need To Know, debuted last week, and even PBS’ ombudsman had to admit the reviews were mixed. But no one was as vicious in their critique as Tom Shales of the Washington Post.

Beyond the comment in question, the entire review was so over-the-top it would make the most obscene, unrestrained blogger blush.

The monstrosity in question, and very much in doubt, is “Need to Know,” a specious wheeze purporting, according to flatulent publicity prose, to take “an innovative approach to newsgathering and reporting” and thereby provide — on “multiple platforms,” of course — “a dynamic source of current-affairs coverage for today’s media consumers.”

This is, mind you, after episode number one.

But the real zinger was aimed at Stewart. “She looked as though she would have been much more comfortable in Clinton’s lap,” wrote Shales, as jaws dropped to the floor, no doubt. “Meacham did a slightly better job of hanging onto a teeny-tiny shred of dignity.”

Since you posted Tom Shales’ crude, crass and sexist comment about me that I’d be “more at home in President Clinton’s lap”– I feel I should respond, for myself and for other hard working female journalists. Mr. Shales’ is certainly entitled to his own views about our program but in most work places it would be simply unacceptable to make this kind of public suggestive insinuation about a colleague.

Stewart is absolutely right – Shales is way over the line with this criticism. It’s ironic that one of Shales’ major critiques relates to his ardent anti-multimedia and anti-multiplatformism, while those who work in these mediums seemingly have higher professional standards than this well-known, and often-respected, TV crank. (I’m sorry – style columnist.) You can hate the show, and still treat the product with a modicum of respect. But instead, Shales takes it beyond just a bad review.

What’s more obvious is he doesn’t just hate the players, he hates the game. Need to Know has “fancily designed Web-page graphics,” and “’empowers audiences to ‘tune in’ any time and any where.'” This is terrible in Shales mind, and signals the demise of the television viewing he had grown accustomed to, and comfortable with. So he takes out his anger (actual line: “I felt embittered — angry”) on the show’s hosts, with cheap shots – especially at Stewart.

And watch the first episode here. See if you have feel the need to spew the same bile as Shales over the supposed “monstrosity.”