Oops! Multiple Papers Jump The Gun On Amanda Knox Verdict, Get It Wrong

Oops! Multiple Papers Jump The Gun On Amanda Knox Verdict, Get It Wrong

This afternoon, news rooms worldwide were on hold as they waited to see which way the Italian court’s would swing on Amanda Knox‘s appeal. In hopes of being first, or at least quick, many newsroom probably had two stories, near-ready for publishing: one assuming she was found guilty once more, the other reporting that she has been set free. When she was acquitted, most outlets got the story up quickly and correctly. One, however, got things wrong. Perhaps hoping to get the jump on the story, the Daily Mail hit go on the wrong one, proclaiming the exact opposite of how things actually went: “Guilty: Amanda Knox looks stunned as appeal against murder conviction is rejected.” 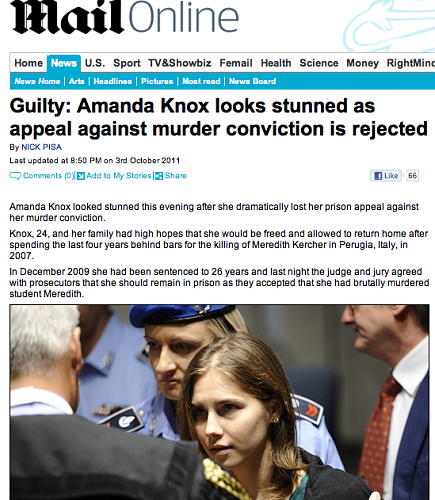 The Mail‘s original story on the verdict, as seen in the screenshot above, seems to have misread Knox’s guilty of slander verdict as guilty also of murder, which she was not found to be. According to PaidContent’s Staci D. Kramer, who first noticed the slip, the Mail‘s presumably pre-written story nailed the “sank into her chair sobbing uncontrollably” part, but incorrectly imagined ‘delighted’ prosecutors as saying ‘justice has been done.’

According the the AtlanticWire, they weren’t the only outlets to get it wrong at first. The Mail‘s British compatriates, the often irreverent tabloid The Sun and the straighter Guardian, also initially reported in err a guilty verdict. This sort of mistake is easy to make and easy to correct, but impossible to erase from the internet, and therefore invites a fair mocking from those who didn’t get it wrong. But really, it could have happened to any of us — maybe we could all slow down.