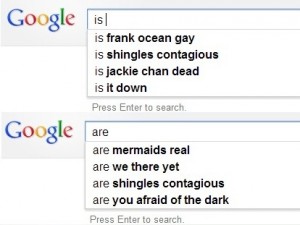 On Tuesday afternoon’s The Cycle, the gang did a segment on a recent Facebook hoax, as well as a new set of rules that Facebook is set to roll out, which are not a hoax. Along the way, co-host S.E. Cupp shared the hilarious story of a man who told his father that Twitter was a search engine, which allegedly resulted in the dad tweeting things like “How do you pronounce Juan?”

Steve Kornacki also discussed, tangentially, the Google autocomplete feature that tells you what people are asking about a particular person. “You ask about John Boehner,” Kornacki said, “and you don’t ask about the fiscal cliff or the tax plan, they ask if John Boehner is gay. Is Joe Biden stupid/retarded/gay/jewish/smart? These are the things that pop up.”

Like an obedient sherson (the singular of sheeple), I immediately began to mess around with Google autocomplete, and discovered that there’s one question that appears to be burning in the minds of Google users. Appearing in the top results for both the word “is” and “are” is the question “Is/Are shingles contagious?” (Shingles is apparently a singular word in this context.)

That’s actually just the tip of the iceberg of time I wasted messing around with Google like a fire-encountering caveman, but it seems like the least I can do is share the answer with any of you who skipped over the headline:

Shingles is contagious and can be spread from an affected person to babies, children, or adults who have not had chickenpox. But instead of developing shingles, these people develop chickenpox. Once they have had chickenpox, people cannot catch shingles (or contract the virus) from someone else. Once infected, however, people have the potential to develop shingles later in life.

The number one question for the word “are” is “Are mermaids real?” (According to NOAA, the answer is “No evidence of aquatic humanoids has ever been found”)

Other weird questions that people are asking based on a single interrogative include:

All of this leads to the inescapable conclusion that the average American is really anxious about being impregnated by a shingles-infected Chuck Norris in a voting booth. In New Jersey.

In case you’re wondering, the top searches for The Cycle hosts are:

I’m not sure what “MSNBC gay” is, but I’m pretty sure it’s awesome.

Update: Here are some of your answers, internet:

Steve Kornacki answers: “No, No, No, Yes”

S.E. Cupp responds “I am in fact Republican, and engaged.”

Touré says “Not gay. Yes married. Not biracial. Not sure what MSNBC gay means.”