‘Deem And Pass’ Latest Evidence Everyone In Congress Is A Hypocrite 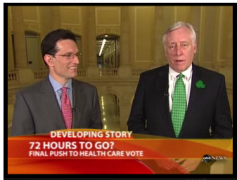 Remember the other week when the political phrase du jour was “reconciliation” and Rachel Maddow spent not a little amount of time illustrating how the Republicans who were in an uproar over the “nuclear option” were actually total hypocrites who had had no problem implementing the procedure when it suited there aims? Well, looks like the shoe is currently on the other foot (color us shocked).

Karen Tumulty at Swampland highlights some flip-flopping on the House Majority Leader Steny Hoyer’s part when it comes to applying the ‘deem and pass‘ (or ‘demon pass’ which is what tends to roll of the tongue). Here is Hoyer in the NYT today:

When the Republican leadership reported a self-executing rule providing for the adoption of the $82 billion plan over 10 years and an almost trillion-dollar plan over 20 years, accelerating the increased child tax credit for low-income people families, we didn’t even get an opportunity to vote on the bill itself except by reference in a self-executing rule. What kind of lack of confidence does that display? What kind of process in pursuit of effectiveness does that mean that we are adopting? What kind of demeaning of democracy is the objective of efficiency resulting in?

Perhaps he is now attempting to answer his own question? Meanwhile, Politco is reporting that using the ‘deem and pass’ method on such huge legislation “could raise constitutional issues sufficiently credible that the Supreme Court might get interested, as it has in the past.” Just writing that sentence down is exhausting. Anyone else feel like the closer we get to this the farther away is actually is? Video below of Hoyer talking ‘demon pass’ on today’s GMA.