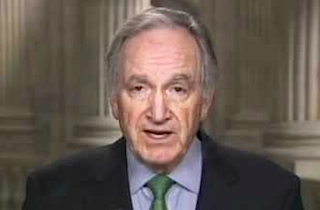 Ahead of President Barack Obama’s address to the nation this evening regarding increased military action against ISIS, the Huffington Post’s Jennifer Bendery spoke to several members of Congress from either side of the aisle and concluded that America’s elected leaders are “practically in lockstep pushing for an expanded fight against the militant group overseas.”

With many members of the House and Senate in tough reelection bids this fall, they are likely loathe to appear soft on terror. But one Democratic senator, who just happens to be retiring at the end of his fifth term this year, feels differently. Tom Harkin (D-IA) was the only Congress member who told Bendery that he opposes escalating the campaign against ISIS.

“We overreacted to 9/11,” he continued. “Most of the people that did 9/11 were Saudis. Why the hell didn’t we invade Saudi Arabia? There wasn’t one Iraqi involved in 9/11. We just keep jumping from one mistake to another. I have a feeling we’re going to do the same thing with [ISIS].”

But not all retiring Congress members are embracing Harkin’s cautious point of view. Asked what she thinks the country should do to combat the group, Rep. Michele Bachmann (R-MN) first criticized the Obama administration’s response, saying, “There’s been no pushback against the Islamic State and they have made breathtaking advances. We haven’t seen anything like this since Hitler and the blitzkrieg in World War II.”

Instead of treating ISIS’ actions as a “law enforcement effort or exercise,” Bachmann said the U.S. should “respond in kind that this is war.”