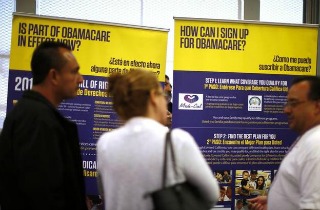 With everyone from Democratic officeholders to a cohort of political bloggers urging, imploring, virtually begging Democratic candidates and incumbents to embrace the Affordable Care Act ahead of the 2014 midterm elections, it seems that only the pollsters are warning that they do so at their own political peril.

“In terms of Obamacare, don’t defend it,” the respected Democratic pollster Celinda Lake urged in March following the release of her own extensive polling on the issue for George Washington University’s respected Battleground Poll. “Say it was flawed from the beginning, and we’re going to fix it.”

There’s just one problem with that strategy: it serves as an implicit rebuke of the 111th Congress, the Democratic Party’s leadership in the legislature, and President Barack Obama.

Perhaps this is why Democrats are busy convincing their colleagues to ignore Lake’s warnings. “I think Democrats should forcefully defend and be proud of [the ACA],” Obama… strongly advised the members of his party seeking office at a Thursday press conference.

The Associated Press helped lay the groundwork for the president’s call to action the day prior when they published a story featuring a variety of Democratic political consultants advising their ideological allies to take a similar course.

“Democrats need to start making the case for Obamacare,” said North Carolina-based Democratic consultant Thomas Mills. “They all voted for it, they all own it, so they can’t get away from it. So they’d better start defending it.”

Even health care policy expert Bob Laszewski, a frequent critic of the ACA, sees an opportunity for Democrats in embracing parts of the law. “I think Democrats have the ability to steal the health care issue back from Republicans,” he told the AP. “The Democratic Party can become the party of fixing Obamacare.”

But those Democrats who are not defending controversial votes they may have taken regarding the ACA, or who are not beholden to the president who is desperate to avoid one last rebuke from the electorate, are warning of a far bleaker future for Democrats with the Obamacare millstone around their necks.

Speaking to Boston Herald Radio last week, the only member of Massachusetts’ all-Democrat congressional delegation to vote against the 2010 health care reform law, Rep. Stephen Lynch (D-MA), warned that the Obamacare — well, you know — is about to “hit the fan.”

“There are parts of Obamacare, or the Affordable Care Act, that were postponed because they are unpalatable,” Lynch observed. “As these provisions come into effect, the administration thus far is saying, ‘Gee, we really can’t handle this right now so we’re going to delay it.'”

“These obligations keep piling up,” he continued. “Any individual with an individual healthcare plan that exceeds $10,200 is in a Cadillac plan situation. They’re going to have to pay — that employer, if they provide that, and many do today let alone in 2018 — will have to pay a 40 percent tax on the amount over the minimum established — excuse me, the maximum established under the Affordable Care Act.”

“That is a huge tax. It’s the first time in this country’s history that we have actually taxed health care,” Lynch said. “We used to treat it like food, that people would die without it. Well, we’re in a new day now.”

Here, Lynch implies that Republicans could — if they were so unscrupulous — turn the liberal strategy of accusing those Republican-led states that refused to expand Medicaid of murder on its head.

“We will lose seats in the House,” the Bay State congressman confessed when pressed on the likely political impact of the ACA. “I am fairly certain of that based on the poll numbers that are coming out from the more experienced pollsters down there. And I think we may lose the Senate.”

Lynch did not mince words when he said that the Democrats’ dire political straits are “primarily because of health care.”

The elements of the law that Lynch cited which have yet to kick in are only some of the more onerous aspects of the law that continues to tick ominously like the economic time-bombs they are. Many analysts believe that the flood of cancelled individual insurance plans that characterized the law’s early implementation period was merely a prelude to when (or, as former White House Press Sec. Robert Gibbs said, if) the ACA’s employer mandate is enacted.

While the White House and their allies in the press have seized on a Congressional Budget Office report that predicts insurance premium rates will increase at a slower rate than in years past, some health insurers continue to predict double-digit premium increases for some marketplaces in 2015. Others warn that that rates could double over the next two years.

The biggest rate hikes, experts say, will occur in states that were slow to adopt aspects of the ACA. In related news, Democrats are presently defending incumbent Senate seats in six states that former Republican nominee Mitt Romney won handily in 2012. Republicans need just six seats to flip control in order to retake the Senate.

The stakes surrounding the Affordable Care Act are high. So high, in fact, that it serves some of the president’s allies more to insist that the debate over the success of the ACA is “over.” It would seem that no matter how many supportive blog posts are published, candid statements like those made by Lynch and others indicate that Obamacare will persist as a political problem for Democratic political aspirants and incumbents.

Watch the clip below via The Boston Herald: