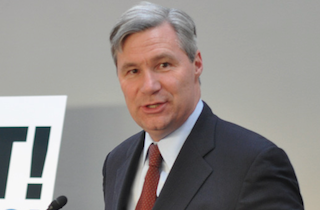 On Monday, Sen. Sheldon Whitehouse (D-RI) gave a speech criticizing Republicans who reject climate change. In it, he invoked various natural disasters, including the tornadoes in Oklahoma — which quickly prompted response from those who felt he was politicizing a devastating situation. Whitehouse has since said he regretted the timing of his remarks.

“Tragically and unbeknownst to the senator at the time, a series of tornadoes were hitting Oklahoma at the same moment he gave his remarks,” the senator’s spokesman told FoxNews.com. “Senator Whitehouse regrets the timing of his speech and offers his thoughts and prayers to the victims of yesterday’s storms and their families, and he stands ready to work with the senators from Oklahoma to assist them and their constituents in this time of need.”

RELATED: ‘Time To Wake Up’: Why One Senator Was Brave Enough To ‘Politicize’ The Oklahoma Tornado

In the speech, Whitehouse cited hopes of a “Republican Party that has returned to its senses.”

“We are stuck in this together,” he said, adding:

“When cyclones tear up Oklahoma and hurricanes swamp Alabama and wildfires scorch Texas, you come to us, the rest of the country, for billions of dollars to recover. And the damage that your polluters and deniers are doing doesn’t just hit Oklahoma and Alabama and Texas. It hits Rhode Island with floods and storms. It hits Oregon with acidified seas, it hits Montana with dying forests. So, like it or not, we’re in this together.”

Not surprisingly, the reaction to the speech included complaints of “politicization.”