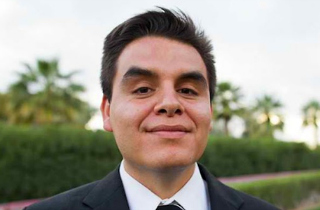 When tasked with leading the Arizona House of Representative’s opening prayer on Tuesday morning, State Rep. Juan Mendez (D-Tempe) asked members not to bow their heads as he instead gave a short speech on the “secular humanist tradition” that informs his beliefs.

According to the Phoenix New Times Mendez began the House Session by telling his colleagues not to follow the usual religious tradition for this situation: “Most prayers in this room begin with a request to bow your heads. I would like to ask that you not bow your heads.”

He continued: “I would like to ask that you take a moment to look around the room at all of the men and women here, in this moment, sharing together this extraordinary experience of being alive and of dedicating ourselves to working toward improving the lives of the people in our state.”

Arizona’s House of Representatives currently holds a Republican majority, most of whom identify as Christians, and yet Mendez’s God-free “prayer” continued:

“This is a room in which there are many challenging debates, many moments of tension, of ideological division, of frustration. But this is also a room where, as my secular humanist tradition stresses, by the very fact of being human, we have much more in common than we have differences. We share the same spectrum of potential for care, for compassion, for fear, for joy, for love.”

The Democrat also quoted a popular scientist and agnostic, the late Dr. Carl Sagan: “For small creatures such as we, the vastness is bearable only through love.”

Mendez’s “prayer” came several days after the United States Supreme Court agreed to hear a dispute over prayers used to open public meetings. For his speech, the Democratic lawmaker brought in and introduced members of the Secular Coalition for Arizona, one of whom said she was “witnessing history.”