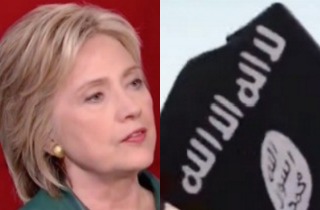 Minus 1.21 gigawatts and a DeLorean, 2016 may still prove to be a year of time travel… at least in the electoral sense. Because after the attack on a Russian commercial airliner by ISIS (killing 224 people via a bomb on board) and the carnage throughout Paris last Friday (killing 129 and injuring hundreds), the narrative of next year’s presidential race may have just permanently changed.

According to a Reuters/Ipsos poll over the weekend, the two issues tied at the top of voters’ minds are the state of the economy and concerns over terrorism (essentially ISIS), with the latter nearly doubling (from 9 to 17 percent) in its climb to the co-top spot since the same poll was taken last month. It all feels so reminiscent of 2004, when an even higher number of respondents (19 percent) listed terrorism as their top priority when deciding whom to vote for. And of those who felt that way, a whopping 86 percent voted for incumbent George W. Bush, according to exit polls. Of course, Bush’s challenger (John Kerry) is now our current Secretary of State.

For those who vote Democratic, these are the kind of polls you don’t want to see. Hillary Clinton, Kerry’s predecessor under President Obama, will be forced to own the rise of ISIS the same way she clumsily owned her Iraq War vote back in 2008 while trying to disown it. But as we witnessed last Saturday night in Iowa, it will be a big challenge for Mrs. Clinton to distance herself from the stunning rise of ISIS and the multi-nation-occupying caliphate and the ultra-modern propaganda and recruiting machine that it became on her watch. Exhibit A came during said debate, as she fumbled through what was an unconvincing answer when asked by CBS’ John Dickerson about the legacy of the Obama administration (and by extension, her legacy as Secretary of State) would be that it underestimated the threat from ISIS:

CLINTON: “I think that we have to look at ISIS as the leading threat of an international terror network. It cannot be contained. It must be destroyed. There is no question in my mind that if we summon our resources, both our leadership resources and all of the tools at our disposal … that we can bring people together. But it cannot be an American fight. What the president has consistently said … is that we will support those who take the fight to ISIS. That is why we have troops in Iraq that are helping to train and build back up the Iraqi military, why we have special operators in Syria working with the Kurds and Arabs, so that we can be supportive.”

Dickerson seemed to anticipate a non-answer coming in advance and pressed thusly:

DICKERSON: But, Secretary Clinton, the question was about, ‘Was ISIS underestimated?'” The president referred to ISIS as the JV [team]. You, in a speech on foreign relations in June of 2014, said, ‘I could not have predicted the extent to which ISIS could be effective in seizing cities in Iraq.’ You’ve got prescriptions for the future, he added, “but how do we know if those prescriptions are any good if you missed it in the past?”

CLINTON: I think that what happened when we abided by the agreement that George W. Bush made with the Iraqis to leave by 2011, is that an Iraqi army was left, that it had been trained and that was prepared to defend Iraq. Unfortunately, Nouri al-Maliki, the prime minister, set about decimating it. And then with the revolution against [Syrian President Bashar] Assad, and I did, early on, say we needed to try to find a way to train and equip moderates very early so that we would have a better idea of how to deal with Assad because I thought there would be extremist groups filling the vacuum, yes, this has developed, I think that there are many other reasons why it has in addition to what happened in the region, but I don’t think that the United States has the bulk of the responsibility, I really put that on Assad and on the Iraqis and on the region itself.”

Shorter Clinton: this whole mess and any future ISIS attacks that occur against the West certainly aren’t my fault, nor the fault of the president. As stated above, it was my idea to train and equip moderates (rebels), and we all saw how great that turned out ($500 million spent for producing five fighters). As for the United States and its overall responsibility, that’s really unfair to place it on us/me. Blame Assad and the Iraqis.

Uh-huh. Given the current environment, good luck with that kind of answer moving forward…

And if ISIS continues with attacks like the ones its carried out in various forms on land and in the air against multiple countries (France, Lebanon, Russia)–which obviously weren’t on a 9/11 scale in terms of casualties but can still dominate news cycles and therefore the political narrative for long stretches–this will be a huge problem for the likely Democratic nominee, particularly if an attack like Paris occurs on American soil. Simply put, the economy, terrorism and security are media themes Mrs. Clinton or the party in general does not want to have to address often in 2016 (demonizing Republicans on social/gender/equality issues is the preferred course). Because as we witnessed in 2004, the last two issues (terrorism, national security) has been a losing argument for the Democratic party in general, and will be even tougher sledding next year since its nominee will be directly tied to underestimating America’s (and the world’s) biggest threat.

As for that other top priority of voters–the economy–Mrs. Clinton is welcome to run on it but it appears (based on her campaign speeches thus far) that she absolutely will not. The unemployment rate is at about the same number now (5.0 percent) at it was going into the 2004 election (5.4 percent), a number any incumbent party would be proud of. But as a recent Fortune Magazine headline asked: The Unemployment Rate is 5%. So Why is America So Grumpy? Quick answer: Wages are flat despite the president claiming otherwise (good read from CNN here), many of the jobs being created are of the part-time variety and workforce participation is at the lowest point in the nation’s history. As a result, according to an October Associated Press poll on the economy, 54 percent rate the economy not as average, not OK, but poor. All of that said, don’t expect Hillary to be promising four more years of an Obama economy if she remotely expects to win.

2004 was an election Mr. Bush won largely because more Americans trusted him by an almost 9-to-1 margin on fighting terrorism and keeping the homeland safe. Mass refugee admission to the country will be a big issue as well, which makes this NBC News poll released today an interesting one, showing a majority of Americans (56 percent) oppose allowing more Syrian refugees into the country. When narrowing that down to independents, the number really catches your attention: 59 percent oppose, 40 percent approve.

2016 is less than a year away. Many things will change between now and then, but ISIS’ determination and capability to strike innocent civilians abroad or here likely won’t be one of those changes.

We keeping hearing ample talk about the big issues that may impact the upcoming election. Climate. The wealth gap. Abortion… the kind of topics that dominate rundowns on slow nights in cable news.

In the end, it’s always about the economy and (fill in the blank). In 2016’s case, the blank is terrorism and national security. It’s Back to the Future all over again. But it’s not a trip back to 1955, but 2004… the last presidential election actually won by a Republican.