Despite Pepsi, United, and Spicer Hubbub, Trump/Russia Investigation Gets Deeper

Despite Pepsi, United, and Spicer Hubbub, Trump/Russia Investigation Gets Deeper 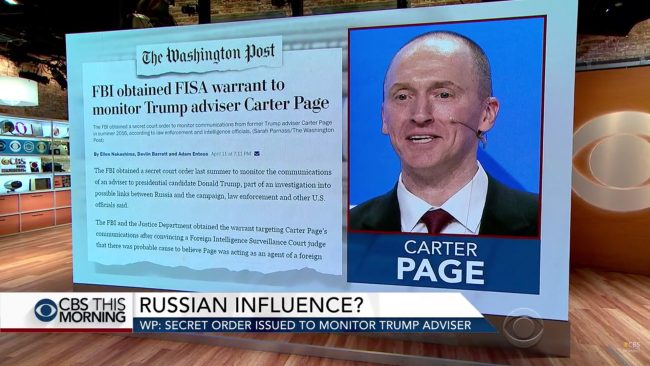 The latest development in the investigation into possible ties between President Donald Trump‘s 2016 campaign and the Russian government might have gotten lost in the cacophony of the Sean Spicer/Holocaust firestorm on Tuesday.

The Washington Post, citing anonymous federal officials, reported on Tuesday, that a FISA court judge granted a warrant to the FBI in the summer of 2016 to monitor the communications of Carter Page, a Trump advisor at the time. The agency convinced the judge there was “probable cause to believe Page was acting as an agent of a foreign power, in this case Russia, according to the officials.”

The newspaper also revealed that “Since the 90-day warrant was first issued, it has been renewed more than once by the FISA court.”

The Post article underlined that “this is the clearest evidence so far that the FBI had reason to believe during the 2016 presidential campaign that a Trump campaign adviser was in touch with Russian agents.”

Page replied to the revelations by claiming that he was vindicated: “‘This confirms all of my suspicions about unjustified, politically motivated government surveillance,’ Page said in an interview [to the Post] Tuesday. ‘I have nothing to hide.'”

The former Trump advisor went further on the record about the reported FBI surveillance in a Tuesday interview with The Daily Beast. “I was so happy to hear that further confirmation is now being revealed. It shows how low the Clinton/Obama regime went to destroy our democracy and suppress dissidents who did not fully support their failed foreign policy.”

The Daily Beast also pointed out that Page claimed in a recent e-mail that if the U.S. and Russia had closer ties, the recent chemical weapons attack in Syria and subsequent U.S. missile attack could have been prevented. He asserted that the two countries were instead “distracted” by the investigations into Russia’s role in the 2016 presidential election.

Instead of Congress encouraging negotiations with Moscow which might have otherwise helped prevent the chemical attack of 4 April and other recent atrocities in Syria, the continued distraction of last year’s fabrications stood as an obvious roadblock to any serious collaboration that might have saved innumerable lives.

Page later “railed against what he called the ‘current Cold War trajectory’ between the United States and Russia.”