Despite Pornography Charges, Democrats Are Stuck With Alvin Greene 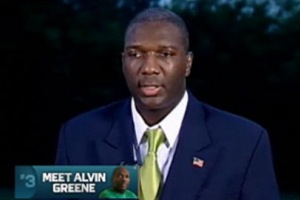 South Carolina Democratic Senate Candidate Alvin Greene is having a bit of a bad week, but his party may be taking an even bigger hit. Sure, he was indicted on those felony charges of showing a college girl some pornography, but, despite the indictment, there’s little the Democrats can do to get him off the ticket, as the requirements to be on the ballot are living in the state and being of age, not having a clean criminal record.

Politico gathered the shrugging responses from Democratic state party officials, most saying that, while they would try their best to encourage Greene to step aside, they legally have their hands tied. State party chairman Carol Fowler called for him to step aside yet again last night, arguing that “It will be impossible for Mr. Greene to address his legal issues and run a statewide campaign. The indictment renews concerns that Mr. Greene cannot represent the values of the Democratic Party or South Carolina voters.” Greene has shown no indication that he will do anything of the sort, and, even if convicted, he may not have to, and the party is ready to certify him by Monday as their candidate– they have no choice.

The South Carolina Elections Division, which seems to find itself in a similar (but not as embarrassing) position as the Democrats, expressed that there’s nothing they can do to stop this, either, since “even if he were to be convicted before the election, the law appears read that he could still serve and be on the ballot.” Why? Well, the only thing stopping a convicted felon from running is the state constitution– which, on national scale elections, doesn’t apply. It seems Greene has found a rarely- used legal loophole to secure himself as candidate, possibly win the election and use tax dollars to open up his action-figure factory.

But here comes the fun part: even if Greene does defeat incumbent Republican Sen. Jim DeMint, the Senate doesn’t have to accept him as one of them. Yes, the Senate can refuse to seat him, and it’s happened before. Remember Sen. Roland Burris?