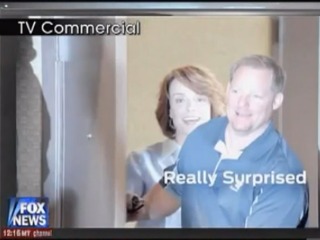 Earlier this month, we looked into a report Fox News’ Megyn Kelly presented on an anti-bailout ad from Ford Motor Co. Was this commercial, she wondered, trying to piggyback onto the Tea Party movement’s energy (and its wariness) by voicing disapproval of American car companies that, unlike Ford, agreed to take government bailout money? (Video of that report has been added at the bottom of this post.)

Well, now Detroit News columnist Daniel Howes is reporting that the car company has pulled the ad after questions from the White House:

With President Barack Obama tuning his re-election campaign amid dismal economic conditions and simmering antipathy toward his stimulus spending and associated bailouts, the Ford ad carried the makings of a political liability when Team Obama can least afford yet another one. Can’t have that.

The ad, pulled in response to White House questions (and, presumably, carping from rival GM), threatened to rekindle the negative (if accurate) association just when the president wants credit for their positive results (GM and Chrysler are moving forward, making money and selling vehicles) and to distance himself from any public downside of his decision.

In other words, where presidential politics and automotive marketing collide — clean, green, politically correct vehicles not included — the president wins and the automaker loses because the benefit of the battle isn’t worth the cost of waging it.

An industry source stressed that there was not any pressure to take the ad down, adding that Ford “never meant to attack the policy.” At the time of Kelly’s report for Fox News, a spokesperson for the company also said that the ad is not meant to be “an attack,” but, rather, a change to let an actual Ford driver share his thoughts.

This afternoon, however, Ford Motor Co. responded to a disgruntled Facebook comment calling the pulling of its ad “gutless” by assuring the public that the ad was taken out of circulation in a manner that was totally routine. What makes this doubly interesting is that it wasn’t just any ol’ commenter who called the company out — it was the man in the ad it was some dude having a bit of fun: 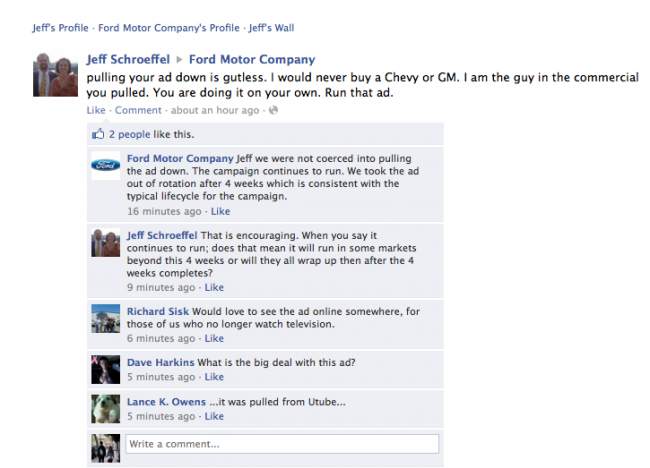 Update: The man who actually appeared in that ad is named Chris McDaniel and he gave Larry O’Connor an interview about the “commercial-pulling controversy:”

In an exclusive interview with Breitbart.com, the “star” of the popular ad, Chris McDaniel told me he was “a little bit flustered’ by Ford’s decision. He found out about it during a live radio interview this morning. “I had no idea. As soon as I got off the interview, I sent an e-mail to Ford’s VP of Marketing.” He told me, “I put myself out there on the line. You either stand behind it or you don’t.”

Ford has not yet returned Mr. McDaniel’s e-mail.

The interview also includes McDaniel’s video response to the discussion surrounding his ad.

For reference, here’s the original report on the ad from Fox News: