Did George Zimmerman Complain About ‘F*cking C**ns’ In 911 Call Before Killing Trayvon Martin? 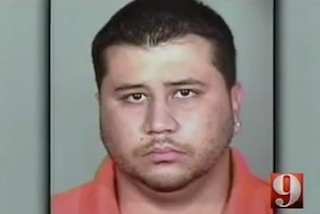 No matter how you look at it, the killing of Trayvon Martin is an ugly, ugly story that touches on any number of touchy subjects; vigilantism, gun control, possible police misconduct, issues with the controversial “Stand Your Ground” law, and the touchiest of all, race. As our own Frances Martel so elegantly explained Sunday, this case shouldn’t be seen as just a “black problem,” but a case we all follow closely. However, the story is inexorably tied to race issues and probably will be even more so now that some are claiming that they can hear the shooter, George Zimmerman, grumbling about “fucking coons” in the 911 call he made before killing Martin.

The killing has become a huge national story thanks in part to the contributions of black media figures bringing it to people’s attention, but also due to the 911 calls that local Sanford police released to the public late last week. Most of the recordings are from local residents who heard the altercations and called the police (in one you can actually hear a male voice screaming for help and then the fatal gunshot). One though, was from Zimmerman himself. In it, he speaks to the police and explains that he sees a young black man whom he finds “suspicious.”

Most of the attention that tape has garnered has been over the portion where the officer specifically tells Zimmerman he’s not to follow Martin. Had Zimmerman followed these instructions (which are also part of the national guidelines for any Neighborhood Watch, which Zimmerman was a part of), Martin would still be alive.

However, now the attention has moved to the seconds before that back and forth. In those moments, Zimmerman can be heard moving after Martin (the sounds of his movements are what caused the officer to ask if he was pursuing Martin). In the midst of these sounds, there seems to be a quick comment made under Zimmerman’s breath and some now say  is  “fucking coons,” coon obviously being a racial slur against blacks.

This interpretation has been bubbling up throughout the day, being discussed on the Internet as well as between public figures who are proponents of the case: 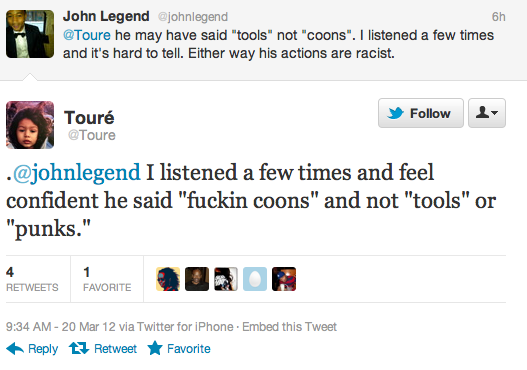 It has even been reported in the mainstream media. Today, local ABC affiliate in Florida WFTV reported the comment and suggested the idea that those were the words Zimmerman said. At the very least, they bleeped them out for the audience.

So, how does this affect the case? While Zimmerman has been silent towards the media, his family has pushed back at claims that he’s a racist, pointing out that he is of mixed race himself (Caucasian and Latino). If true, this would seem to silence that argument. More importantly, that comment would further demonstrate that Zimmerman was the aggressor (since that fatal night, he has claimed that he was acting in self-defense). It will also serve as powerful evidence that this is a civil rights case.

Whether Zimmerman was motivated by race or not, this is one question in a story with so many. And, either way, a young boy remains dead. Still, this could be an important fact. So, what do you think? Listen to the full 911 tape below.