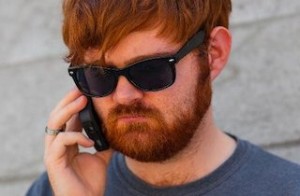 Remember Chuck Johnson? The conspiracy-friendly internet troll who harassed people and got kicked off Twitter last year? Well, a report this week suggests that he may have known something about Peter Thiel‘s case against Gawker.

Last year, Johnson filed a $66 million defamation lawsuit against Gawker for two posts they did on him––one of which was titled “Wait, Did Clowntroll Blogger Chuck Johnson Shit On The Floor One Time?” (It’s about exactly what you expect it’s about.)

Back in October, Johnson cryptically said on Facebook that “Gawker will cease to exist in a year’s time.”

And that’s where the possible Thiel connection comes in, because Johnson went on to say this:

I can’t tell you how I know because that would break my word but I promise you it.

Either Hulk Hogan or I will triumph over Gawker. It’s going to happen.

This week Forbes followed up on Johnson after he largely disappeared from the public eye. And Johnson had revealed to them that he’s likely dropping the suit.

But Forbes reports that Johnson had reached out to the law firm that represented Hogan in his suit against Gawker, as well as reaching out to other law firms in the L.A. area.

Johnson strongly denied the former, but Gawker itself took an interest in this report and corroborated some details:

Gawker was able to independently confirm that Johnson approached a Los Angeles law firm about representing him against Gawker shortly after a Florida jury awarded Hulk Hogan $110 million in damages (which would later rise to $140.1 million) in March of this year, and that he characterized his lawsuit as part of a broader legal campaign. According to a source with knowledge of Johnson’s approach, he was apparently cryptic about what this campaign entailed.

Oh, and just to cap this off, when Gawker reached out to Johnson for comment, he said that Forbes “made up some stuff” and wondered if he should sue.