Did John Kerry Just Accidentally Solve the Syrian Crisis, or Fumble It? 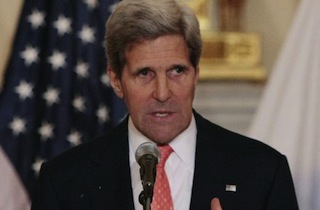 Did Secretary of State John Kerry inadvertently propose a political solution to the escalating crisis over Syria’s use of chemical weapons?

In response to a question Monday morning of whether Syrian President Bashar al-Assad could do anything to avoid an attack, Kerry responded, “Sure, he could turn over every single bit of his chemical weapons to the international community in the next week — turn it over, all of it, without delay and allow the full and total accounting.”

Almost immediately realizing that this might be taken as a serious offer of political settlement, Kerry quickly backtracked, explaining that he considered Assad’s compliance with this option impossible. The State Department also walked back his statement, claiming Kerry had been speaking “rhetorically.”

But it looks like Russia is taking the offer seriously, as Russian Foreign Minister Sergei Lavrov announced that his country was advising Assad to place all of his chemical weapons under international control. Not too long afterward, Reuters and AP both tweeted that Syria “welcomed” this arrangement, though it is not clear at this point what, if anything, that means:

Not surprisingly, some are skeptical:

For what it’s worth, Kerry did not pull this solution out of thin air. Various foreign ministries have been kicking around the idea for a week, ever since it became clear that military action in Syria was not garnering much international support.

Washington Post’s Max Fisher gamed out the two scenarios from Russia’s offer. Either Russia is sincere, removing Assad’s nastiest weapon and allowing the U.S. to declare victory on its limited goals without drawing itself further into the conflict, but also precluding any further intervention on behalf of the Syrian rebels; or Russia is using this as a delaying tactic in a long game of foreign affairs chess, betting that any pause in the run-up to a strike would likely bleed what little momentum such a proposal had.

Here’s Fisher on the gamesmanship behind both moves:

The bad news is that if Russia and Syria do go through with this plan, it would signal that both believe Assad can still win without chemical weapons. They would probably be correct. And it would significantly reduce the odds of any U.S. action against Assad, although it’s debatable whether that would be a good or bad thing for Syria. But, as Washington Institute for Near East Policy Executive Director Robert Satloff pointed out to me on Twitter, the “exit of conventional weapons would end any possibility of U.S./Western military action to balance the battlefield.” That’s a sign that Lavrov’s plan might be for real.

But there’s also strong reason to suspect that Russia’s plan is a bluff, a clever chess move meant to delay a U.S. strike and force lengthy negotiations that will go nowhere. That would certainly be signature Lavrov. It could take months to negotiate over whether Assad would accept the plan, the process of surrendering the chemical weapons, where they’d go and so on. Meantime, the United States would be beholden to delaying strikes. If Russia does just want to delay, it will have many opportunities to do so along the way, and in the meantime any momentum within Washington for action will be lost.

Either way, as Fisher points out, the fact that Russia is doing anything at all is a sign that they are taking the threat of U.S. military involvement seriously.

However, the move now puts President Barack Obama in the tough position of determining whether Russia is being sincere or not: does he accept one of the few political exits from a conflict even he admits presents no good options, at the risk of letting Assad off the hook; or does he press on with an unpopular proposal for military action, with the potential that the U.S. could become further involved in the region while looking back fondly on the non-military solution that could have been?

And a fascinating question for those who will write the accounts of this crisis, however it turns out: what if Kerry hadn’t spoken “rhetorically” this morning?