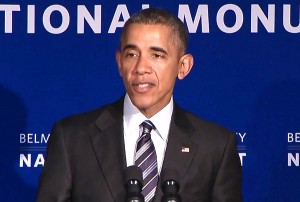 President Obama raised a few eyebrows Tuesday afternoon in his remarks at the newly-designated Belmont-Paul Women’s Equality National Monument when he told the crowd that future generations would marvel at a time when there had never been a woman president of the United States, which some took as a quasi-stealth endorsement of Hillary Clinton, along the lines of what Joe Biden said Monday:

The remark raised enough eyebrows that the first question at Tuesday’s White House daily briefing was whether President Obama was “edging closer” to an endorsement of Hillary Clinton with that statement. Press Secretary Josh Earnest called the comment a “values statement,” and talked about the voters deciding who will be president, but there was one bit of boilerplate missing from his response, if you’re inclined to read into things:

Nowhere in that response did Earnest restate the President’s preference to remain neutral until the nominating process is complete, a possible sign that the tightening Democratic race could eventually necessitate an Obama endorsement. Or not. Nobody knows.