Did Trump’s ‘Birtherism’ Stunt Cause a ‘Snapping’ in the News Media, or Just a Blip?
Opinion

Did Trump’s ‘Birtherism’ Stunt Cause a ‘Snapping’ in the News Media, or Just a Blip? 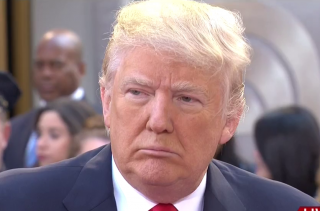 I wrote here last week that the modern news media may be so broken that they may not be able to prevent Donald Trump from being elected president on their own. Just before that, I wondered why they were effectively letting Trump off the hook on one of the most clearly “disqualifying” moments of his political “career,” his “Birtherism” crusade.

Since then, thanks to Trump’s bizarre press conference finally acknowledging, at least five years too late, that President Obama was indeed born in the United States, all hell has broken lose. Almost every “mainstream” television outlet has had at least one, if not multiple examples of where members of the news media have nearly lost it in their passionate condemnation of Trump’s scandalously self-serving “trolling” of them. Even Dan Rather, proving that he is apparently still alive, jumped into the act with a viral Facebook post.

It all felt like something had finally “snapped” in the news media as the realization that Trump, with Hillary collapsing in the polls about as dramatically as she did at the 9/11 memorial ceremony, really might be able to scam them all the way to the most powerful position in the world. And to be clear, a powerful argument can be made that this was not an irrational reaction.

After all, “Birtherism,” let’s not forget, was Trump’s own political “birth story.” Without the “street cred” it had bought him among those to whom Hillary Clinton might refer to as being in the “basket of deplorables,” (about 20% of the GOP primary electorate, which is why none of his cowardly GOP opponents had the balls to go after him on “Birtherism,” in my opinion), there is no way Trump ever gets traction in the GOP race and, therefore, he probably never wins the nomination. Trump bailing on that issue now is kind of like Jesus Christ informing his followers that whole thing about the virgin birth and the Star of Bethlehem was just an irrelevant misunderstanding that we can pretend never really happened.

But it wasn’t just that he had suddenly pretended that five years of questioning the president’s potential eligibility for the office (after it had already been proven beyond any shadow of doubt) never really happened. It was the way he went about it which was so infuriating to those who believe in truth and accountability.

He not only used the event to promote his new hotel, but he gathered military veterans to form an almost literal human shield around him as protection from the consequences of the political “felony” which he was admitting to, without actually doing the “admission” part. Then he lied about Clinton having started the rumor during the 2008 campaign (as if him being duped into championing a nutty, low-level, left-wing conspiracy theory, and continuing his crusade well after it is proven false, is somehow “exculpatory”!). He then lied about having “ended” the controversy in 2011, and offered no apology for having been so very wrong about a subject that, especially given Obama’s race, was so hurtful, to so many people.

Weirdly, Trump also gave zero indication as to how he very suddenly finally came to the conclusion that Obama really was born in the United States, just hours after having indicated that he still was not sure about the answer to that question. My presumption is that he got a phone call Friday morning from his top secret (so top secret that “The New York Times” found no evidence he existed) Hawaiian investigator who said that he had finally solved the case. I’ll bet it just had to be John Miller.

Personally, as a “Never Trump” conservative, I found the whole thing to be repulsive. Ironically, it seemed extremely reminiscent of Bill Clinton’s “I did not have sexual relations with that woman” moment, as Trump seemed to use the same declarative/defiant style and cadence along with the “now let’s back to the important stuff” ending. Seeing him blatantly lie in order to slither out of this noose brought back a lot of very bad memories from the late 1990s (speaking of the 90’s, seeing “conservatives” embarrass themselves by cheering Trump’s epic “trolling” of the media felt very much like people rooting on O.J. Simpson’s white Ford Bronco as the double murderer “stuck it” to “the man”).

This is why I found the media’s very negative response to Trump’s audacious gambit so fascinating. When Bill Clinton played them like a fiddle they basically applauded in stunned admiration. However, when Trump does the same, they are infuriated. I guess only Democrats who actually admit to being democrats are allowed to get away with such a brazen con job.

Of course, the big question here is: has something fundamentally changed with the news media’s treatment of Trump, or will this be very temporary as is almost everything in this era when the media has the collective attention span of a small child?

Logically, a strong case has been made that most of the “mainstream” news media has finally decided to take the gloves off when it comes to Trump. They clearly see him, at best, as unqualified for the job and, at worst, possibly dangerous to the country. Thanks to Hillary crumpling in the polls, they also no longer have to worry about taking Trump “out” too soon and therefore killing the drama/ratings of the debates and the final weeks of the campaign (overconfidence from his foes in their ability to exterminate Trump has been probably his greatest asset in this entire campaign). In a rational world, the history of “Birtherism,” the real story of Trump’s far-less-than-magical business record, and his effectively unprecedented unwillingness to release his taxes, would dominate the news cycle until the first debate.

However, I am very skeptical that the news media has the discipline to pull this off any more. Trump, the master media manipulator, seems to instinctively understand the news media’s weaknesses (largely because he is so much like them in nearly every way) and is able to control the media agenda. Amazingly, he often distracts them with something seemingly damaging, safe in the knowledge that they will just move off that story in a couple of hours and never go back to a proper vetting of his fraudulent business narrative, which would be really dangerous to his campaign (it is really remarkable that, in reaction to Obama becoming the least vetted president in modern times, Republicans have managed to find a candidate who might easily top him in that regard).

It seems very much like these next couple of days will tell us a lot about how the news media will handle the rest of this crazy election. Will they largely continue to pretend that this is all a big game, or have they finally decided it really is time to get serious about whether the American people should at least have a clue about who the real Donald Trump is before he might be elected President of the United States?

My guess it that the result will be more the former than the latter. However, I still maintain the potential nightmare scenario of a Trump presidency is unlikely, though, shockingly, not at all impossible.