Did You Really Think Trump Was Going to Change?
Opinion

Did You Really Think Trump Was Going to Change? 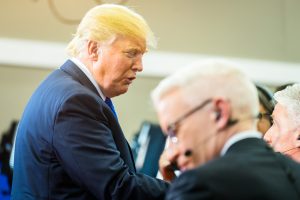 Did you believe Trump when he said he was going to be “so presidential”? Do you still think Trump is going to “pivot”?

Do you still counsel your colleagues and friends to “give Trump a chance” or “wait and see”? If so, do you know many 70-year-olds who completely changed their personalities? Did you somehow pass the 17 months of his campaign blissfully in a coma, and not observe his behavior yourself?

Does it concern you that he is now skipping his national security briefings, opting instead to get his information from random Twitter cranks and conspiracy crackpot sites?

When Trump stays up at night, retweeting 16-year-olds to get back at CNN for some perceived slight, does that strike you as the behavior of a particularly balanced adult?

Did it raise a red flag when he invited executives and anchors from five major networks into his office for the express purpose of bitching them out? (Does my use of the phrase “bitch them out” offend you? If so, does your pearl-clutching sanctimony extend only to bloggers but not to presidential candidates who brag about their penis on a debate stage?)

Does any of this suggest the sober, calculating mind of a commander-in-chief? Or does it more resemble the antics of a thin-skinned narcissist with the emotional intelligence of a Furby?

When you see Trump baselessly claiming that millions of people voted illegally — with zero evidence to support his claim — does it send a shiver down your spine that the 45th President wants to delegitimize the election because of a bruised ego? Did it occur to you that if he loses in 2020, he could just chalk it up to illegal votes and call it a wash?

As an aside, have you ever cracked open a book about the rise of fascism? Are you aware how quickly other world leaders have usurped power and established autocracies? Is your faith in the solidity of our institutions so unshakeable that you have nothing to fear from a man who has spoken out against freedom of the press, against freedom of religion, against the rights of women and LGBTQ Americans, in favor of committing torture and war crimes?

Or do you simply take comfort in the knowledge that “no matter how bad things get” for other people, you and yours will be just fine? Is that why you are able to cavalierly dismiss the rise in hate crimes that accompanied his victory?

Was it easy for you to disregard Trump’s coy cultivation of support from white nationalists, white supremacists, and neo-Nazis during the campaign? Is it any easier now that he has installed “alt-right” megaphone Steve Bannon in the White House? Do you say “alt-right” with a straight face?

Does it give you a chuckle when he says a silly thing on Twitter, because you momentarily forgot that this reality TV star will soon control the nuclear arsenal?

If you answered yes to any of these questions, what exactly are you taking? And can I get some — like, enough to last four years?