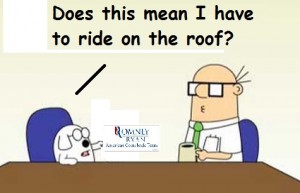 Dilbert creator Scott Adams, last seen blaming society for being cruel to rapists and defending a chain email depicting President Obama as a chimpanzee, has now, appropriately enough, endorsed Mitt Romney for President. Coming, as it does, on the same day as the big Dennis Miller endorsement, it appears that Team Romney has now completely locked down the White Guys Who Laughed  In 1993 demographic.

While Adams’ endorsement is no surprise (other than the accompanying fact that Dilbert still exists), nor is it really news, his “logic” is worth more laughs than his comic strip ever was.

First, some background. There are things called “newspapers” that are like a whole bunch of websites printed on paper, and in these newspapers are things called “comic strips.” Many of them are for kids, but there have been, like, three (The Far Side, Bloom County, Doonesbury, did I miss any?) funny ones for adults. Dilbert is one of the other kind, and it’s creator, Scott Adams, is a model citizen of entitled white male America. Like a lot of these guys, Adams gets his librul on when it comes to his own right to smoke weed or do whatever the eff he wants (aka “Libertarianism”), but gets all Republican-y when it comes time to pay for the society that protects and promotes his privileges.

Thus, the premise of Adams’ endorsement is that President Obama has been too tough on medical marijuana dispensaries, but Mitt Romney will be better because he sucks so much. Or something like that. Also, the President kinda killed a guy, but not really. But he totally killed a guy:

Let’s say a CEO does a great job for stockholders; he increases profits five-fold, treats the employees well, and causes the stock price to skyrocket. He’s a superstar. One day the public learns that the CEO killed a guy to get ahead in his career, but the CEO doesn’t get convicted because his clever attorney gets him off on a technicality. Assume in this hypothetical situation that the public correctly believes the CEO killed a guy to advance his career. Should the board of directors allow the superstar CEO to keep his job? Or is killing a guy to advance your career always a firing offense?

Well, the President didn’t kill a guy, but he did allow federal agents to enforce federal drug laws, which is kinda the same thing. Adams reasons that President Obama should be fired for enforcing laws that people like Mitt Romney will never allow to be changed. I don’t like the President’s record on medical marijuana, but in my imaginary business, I don’t fire the guy who killed one dude so I can hire Hannibal Lecter.

In case you missed it, here’s the guy Dilbert wants to replace Obama with: