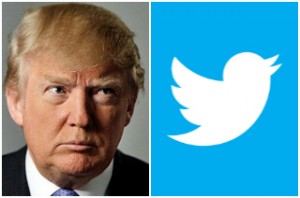 Donald Trump, the conservative movement’s leading voice on minority outreach, has apparently decided, sometime over the weekend, that it is perfectly fine for black people to roam the confines of New York City’s Central Park, even after dark. Wonkette flagged a Twitter exchange in which The Donald suggested that the now-exonerated Central Park Five were guilty of something just because they were in the park, but the good news is that Trump thought better of that suggestion, issued a sincere apology, and promised to sin no more. Well, not exactly, but he did delete the offending tweet, without comment.

The whole thing started when a high school coach told Trump to shut his face about the Boston bombing suspect, or anything else, until he learns his lesson about the Central Park Five, who were wrongfully convicted of the infamous brutal rape of the Central Park Jogger. From Wonkette‘s Rich Abdill:

A high-school basketball coach, making a connection between Trump back then and Trump’s tweet of, “We are not dealing with an innocent baby here-DEATH,” tweeted at him: “With all due respect, after your rant about the Central Park 5, perhaps you should keep law and order comments to yourself.”

Oh snap. Dude set a hard pick and opened up the lane FOR A SICK BURN. But Trump will not be burned, no.

“Tell me,” Trump wrote, “what were they doing in the Park, playing checkers?”

Indeed! Black 14-year-olds? Outside? They must have been up to SOMETHING, good thing the police coerced confessions out of them and they spent a decade in prison, because maybe they were not playing checkers. 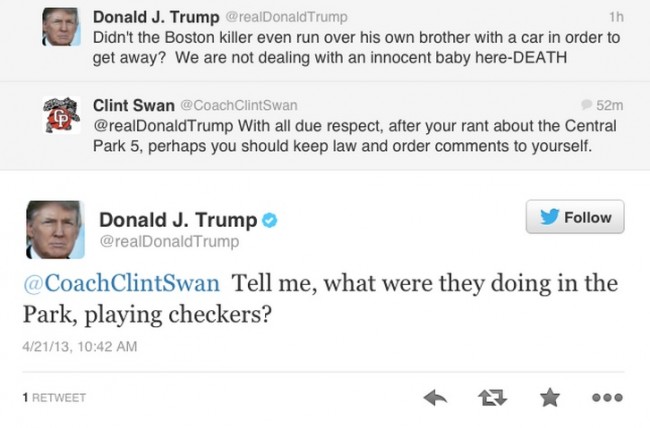 Good for Trump for deleting the tweet, and thereby setting a good example for conservatives, and others who associate themselves with The Donald’s brand of “outreach.” The recently-released Republican “autopsy report” makes clear that the party has written off the black vote, but there are additional downsides to actively attacking black people. Republicans may never be able to make inroads with black voters (at least, not like this), but continuing to applaud a guy who views them as de facto criminals makes other people mad, too.