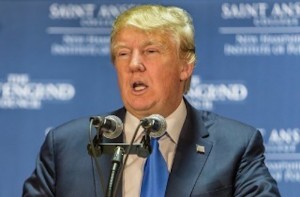 After taking tremendous heat Saturday over his toxic reaction to the parents of the late Captain Humayun Khan, a Muslim soldier who was killed in Iraq, Republican presidential nominee Donald Trump’s campaign released a statement overnight attempting something resembling damage control. The statement itself attempted to reset Trump’s initial reaction to the Khans, without apologizing, and the campaign also released what it called the “Full Transcript of Khizr Khan Answer,” which contained precisely zero differences from the clips ABC News put out.

Trump’s statement did contain belated praise for Captain Khan, and an expression of empathy for his parents:

Captain Humayun Khan was a hero to our country and we should honor all who have made the ultimate sacrifice to keep our country safe. The real problem here are the radical Islamic terrorists who killed him, and the efforts of these radicals to enter our country to do us further harm. Given the state of the world today, we have to know everything about those looking to enter our country, and given the state of chaos in some of these countries, that is impossible. While I feel deeply for the loss of his son, Mr. Khan who has never met me, has no right to stand in front of millions of people and claim I have never read the Constitution, (which is false) and say many other inaccurate things. If I become President, I will make America safe again.

The press release also suggests that the transcript from Trump’s This Week interview will substantially mitigate the remarks Trump is taking flak for:

The Trump for President campaign today released the full transcript of Donald J. Trump’s response to a pre-taped ABC This Week question from George Stephanopoulos referencing criticism from Khizr Khan.

As shown in the full transcript, Mr. Trump doesn’t compare his sacrifices to anybody else’s, and in fact praises Mr. Khan and wishes him well.

Update: Here’s the transcript the Trump campaign released, which appears to have been altered to remove the “praise” for Mr. Khan, now updated with the full video of the exchange from This Week:

I don’t know if you saw this speech, but there was a man named Khizr Khan speaking at the Democratic Convention last night. His son, Captain Humayun Khan, was killed serving in Iraq. And he had some very tough questions for you. He said you wouldn’t have even let his son in America.

He doesn’t know. He doesn’t know that. I saw him. He was, you know, very emotional and probably looked like a nice guy to me. His wife, if you look at his wife, she was standing there. She had nothing to say. She probably, maybe she wasn’t allowed to have anything to say. You tell me. But plenty of people have written that. She was extremely quiet. And it looked like she had nothing to say. A lot of people have said that. And personally, I watched him. I wish him the best of luck.

What would you say to that father?

He said you have sacrificed nothing and no one.

Well, that sounds – who wrote that? Did Hillary’s scriptwriters write it? Because everybody that went out there, we also had John Allen who failed with ISIS. I mean, he was a general, Allen, General Allen. He went out. And he was ranting and raving. And then I read a report. He was in there for a number of months. And he failed with ISIS.

You saw Hillary say last night, you don’t know more than the generals.

Well, I’ll tell you, the generals aren’t doing so well right now. Now, I have a feeling it may be Obama’s fault. But if you look at ISIS…General McArthur and General Patton, they’re spinning in their graves. The generals certainly aren’t doing very well right now. And General Allen, after I saw he was on ranting and raving about me, who he never met, I checked up. Guess what. They weren’t so happy with him. He didn’t beat ISIS. He didn’t beat ISIS. He didn’t do even well with ISIS.

How would you answer that father? What sacrifice have you made for your country?

Oh, sure. I think they’re sacrifices. I think when I can employ thousands and thousands of people, take care of their education, take care of so many things, even in military. I mean, I was very responsible, along with a group of people, for getting the Vietnam Memorial built in downtown Manhattan, which to this day people thank me for.

I raised, and I have raised, millions of dollars for the vets. I’m helping the vets a lot. I think my popularity with the vets is through the roof, far greater than hers. She’s done nothing. All she’s done is tell everybody that the vets are in good shape. They’re fine. And they’re not fine. People are waiting on line for seven days to see a doctor. She thinks it’s fine.