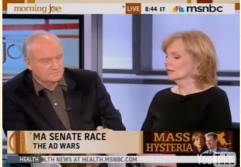 This clip from this morning’s Morning Joe is currently making the rounds due to Peggy Noonan’s remark that today’s Mass. special election GOP candidate Scott Brown is popular because he “looks like an American” (which is not the full quote, though she doesn’t exactly redeem herself either). Actually, Noonan’s remark may be the least offensive to come out of this morning’s chat session on the subject; Donny Deutsch thinks the fact Brown not black or a woman may offer a “visceral comfort” to voters. The more things change, etc.

“We’re going back to basics, we’ve obviously had our first African American president we’ve had the female candidates and whatnot [and whatnot!] you look at him he looks like the candidate, the traditional view of the candidate, and is there a visceral comfort in that for people? I’m just curious from real kind of sociological point of view.”

Ah yes! The sociological point of view! Read: are people less scared because he’s white. Peggy Noonan can actually be heard disagreeing with Deutsch in the background before she goes on to note that Brown does mark a change in the voting habits of a Massachusett because he looks like “a new sort of Republican…he’s a regular guy who looks like an American from the middle, or self-made into a middle class, upper middle class guy…we’re seeing some evolution of what Republicans in Mass are right now.”

So basically a bunch of white people spent part of their morning remarking on how safe and attractive a Republican candidate is. Also, Mike Barnicle thinks Coakley is reminiscent of your least favorite substitute school teacher. Video below.