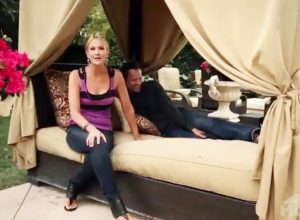 Here’s what we know so far: In 2005, a few months after getting married for the third time, Donald Trump spoke to Billy Bush about how easy it is to “grab [women] by the p*ssy” and how he had tried to seduce a married woman who rebuffed his advances. We later learned that the woman he was rejected by (and who he subsequently disparaged with talk of her “phony tits”) was Nancy O’Dell, a former host of Access Hollywood, where Bush worked.

Here is exactly what he said about O’Dell:

I did try and f*ck her. She was married. And I moved on her very heavily. In fact, I took her out furniture shopping. She wanted to get some furniture. I said, “I’ll show you where they have some nice furniture.” I moved on her like a bitch, but I couldn’t get there. And she was married. Then all of a sudden I see her, she’s now got the big phony tits and everything. She’s totally changed her look.

Trump has been taking a beating online for his idea that furniture shopping is a great way to woo a woman, but that should be the least focal aspect of his comments. For one thing, kissing women without their permission is assault, so his admission that he does that should be the main topic of concern here. For another, he admitted she was married but he still “moved on her like a bitch.” For yet another, O’Dell loves furniture. Seriously, she says it in this video:

“I love furniture,” she said in that HGTV clip.

She has her own furniture line, Red Carpet Furniture by Nancy O’Dell, and talks about her love of interior design all the time.

Sure, this means nothing remarkable about O’Dell, who is entitled to love whatever she wants (including, you know, her husband). It reveals, however, that Trump’s attempt to seduce a married woman was one that was very much premeditated. He did a little research, it appears, to figure out what his crush was into.

That adds an unsavory layer to this entire, uh, as our own John Ziegler has put it, “chicken crap salad.” After all, we don’t know exactly when he made the moves on her, but we do know that she and her husband were married in June of 2005 and WaPo described the tape of his confession to Bush as being made “several months” into his marriage to Melania Trump, which took place in January of that year. If she wasn’t married during the furniture outing, he likely was. Moreover, she was likely engaged. Some have even concluded that the audio was taken in the fall, three months into Melania’s pregnancy with Barron Trump.

Ew. No matter how this incident gets spun, if your gut reaction was that Trump’s dig at her “phony tits” sounded like a man who was hurt more deeply than he wanted to let on and whose ego was bruised by an actual crush, not a woman he hit on in passing, you were very likely correct. This is looking less and less like a mistake in the moment and more and more like an attempt to cheat on one (possibly pregnant!) woman with another married woman.