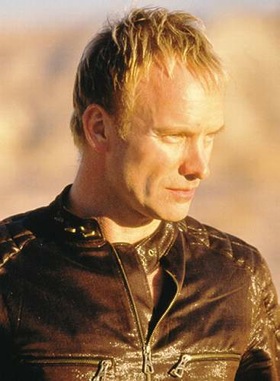 Did you wake up this afternoon in a room you didn’t recognize, surrounded by used drug paraphernalia and with an email from Sting in your inbox? For once, chances are you’re not an aging groupie— just a member of the Drug Policy Alliance. The legendary musician went on the offensive today against the War on Drugs and sent a friendly note of support to every subscriber to their newsletter (and publishing the letter at the Huffington Post).

Sting has been vocal about his support of marijuana legalization before, mostly praising the positive impact he believes marijuana consumption can have on a person’s life. This email, however, is specifically targeted towards ending the War on Drugs and the violence of the illegal drug trade. “Violent crime is thriving in the shadows to which the drug trade has been consigned,” he writes, “People who genuinely need help can’t get it. Neither can people who need medical marijuana to treat terrible diseases.”

It’s also specifically targeted towards… you. Note that subscribers actually got an email from “Sting,” who also happens to be the webmaster at drugpolicy.org, apparently. For drug legalization advocates, waking up to a “personal” letter from Sting must resemble the adrenaline kick that comes around 3:30 PM every day when the apocalyptic Glenn Beck radio newsletter arrives, except it only happens once in a lifetime. Enjoy it while it lasts!

For the few of you that somehow aren’t on the Drug Policy Alliance email newsletter, here’s the full text of the email:

Whether it’s music, activism or daily life, the one ideal to which I have always aspired is constant challenge — taking risks, stepping out of my comfort zone, exploring new ideas.

I am writing because I believe the United States — and all of us — must do precisely that in the case of what has been the most unsuccessful, unjust yet untouchable issue in politics: the war on drugs.

The war on drugs has failed — but it’s worse than that. It is actively harming our society. That is why ending the drug war is a matter of social justice. And it’s why I hope you’ll donate to the Drug Policy Alliance today.

Violent crime is thriving in the shadows to which the drug trade has been consigned. People who genuinely need help can’t get it. Neither can people who need medical marijuana to treat terrible diseases. We are spending billions, filling up our prisons with non-violent offenders and sacrificing our liberties.

For too long, the war on drugs has been a sacrosanct undertaking that was virtually immune from criticism in the public realm. Politicians dared not disagree for fear of being stigmatized as “soft on crime.” Any activist who spoke up was dismissed as a fringe element.

But recently, I discovered just how much that’s changing — and that’s how I came to speak out on behalf of the Drug Policy Alliance. Join me in supporting them with a donation today.

I learned of DPA while reading what once might have been the unlikeliest of places for a thoughtful discussion, the Wall Street Journal.

It featured an op-ed that dared to say in print — in a thoughtful, meticulous argument — what everyone who has seriously looked at the issue has known for years: the war on drugs is an absolute failure whose cost to society is increasingly unbearable and absolutely unjustifiable.

Their work spoke directly to my heart as an activist for social justice — because ending the war on drugs is about exactly that.

To me, it all adds up to a clear message of exactly the sort I’ve always tried to heed in my life: It’s time to step out of our comfort zone and try something new.

That’s where DPA comes in. Their focus is on reducing the harm drugs cause rather than obsessively and pointlessly attempting to ban them.I hope you’ll assist their work by donating today.

I’m partnering with DPA because they champion treatment, advocate effective curricula for educating young people about drugs — and from local courtrooms to the Supreme Court, they are utterly relentless defenders of the liberties that have been sacrificed to the drug war.

Now, political conditions in Washington seem finally to be aligning in favor of profound change in drug policy. But success is far from guaranteed. We must all work to ensure this issue becomes a priority and is acted upon in a meaningful and sensible way.

That’s why I hope you’ll join me in becoming a member of the Drug Policy Alliance today. We are building a movement that will put the team at DPA in a position to take maximum advantage of the political changes in Washington while continuing to fight for sanity in drug policy across the nation.

Everyone knows the war on drugs has failed. It’s time to step out of our comfort zones, acknowledge the truth — and challenge our leaders … and ourselves … to change.