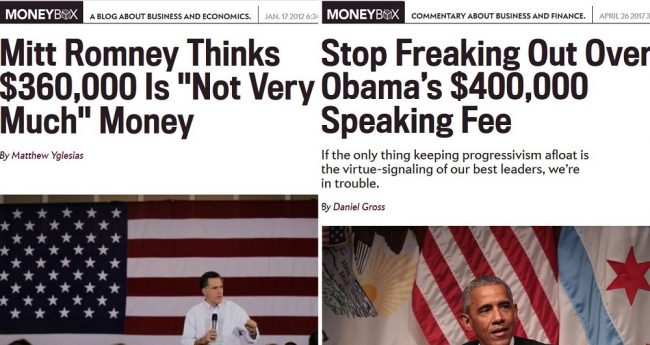 Slate took then-presidential candidate Mitt Romney to task in early 2012 over his claim that $360,000 in speaking fees in one year was “not very much.” Five-plus years later, the liberal website is now brushing off the one-time, $400,000 speaking fee former President Barack Obama is receiving from investment bank Cantor Fitzgerald.

Matt Yglesias (who is now at Vox) zeroed in on Romney’s hesitance to releases his tax returns in a short January 2012 item for Slate’s Moneybox blog, but soon underlined that the Republican candidate “lacks perspective on what constitutes ‘not very much’ income.”

Romney emphasized at the time that “my income comes overwhelmingly from some investments made in the past, whether ordinary income or earned annually. I got a little bit of income from my book, but I gave that all away. And then I get speaker’s fees from time to time, but not very much.”

Yglesias continued by revealing that the 2012 Republican presidential candidate “collected more than $360,000 in speaking fees from such companies as Barclay’s Bank and Goldentree Asset Management over a 12-month period ending last year, according to his financial disclosure filing.”

The writer then played up that “that’s over 7.2 times the median household income in the United States,” adding that Romney’s claim “suggests an unfamiliarity with important, policy-relevant, and not-particularly-obscure economic statistics.”

Five years later, after the news broke on Obama’s upcoming speech, Moneybox turned to Daniel Gross for a Wednesday piece on the former president’s $400,000 speaking fee. Interestingly, Gross led by pointing out Yglesias’s lament about the Democrat’s speech: “Obama’s $400,000 Wall Street speaking fee will undermine everything he believes in.” The Vox writer should at least be credited for intellectual consistency.

Slate, on the other hand, wasn’t interested in that, as they let Gross rail in favor of Obama taking the hundreds of thousands of dollars.

Accepting speaking fees doesn’t inherently compromise your integrity, and there is no baked-in conflict between having or making money and being heavily invested in progressive causes. Progressives don’t hold George Soros’ wealth against him but praise what he does for democracy and philanthropy. If the only thing keeping left-of-center politics viable is the rejection of a set of symbolic, virtue-telegraphing public behaviors, it has much bigger problems than Barack Obama’s income streams.

It is worth noting that, yes, Slate’s initial post was a critique of Romney’s rich-guy comment that “$360,000 wasn’t that much money,” and the defense of Obama is more about cashing in. And while Slate deserves some measure of credit for offering varying points of view, this seems to be an indefensible double standard.

What’s hilarious is that while the Slate contributor was defending the former president’s “progressive” credentials, he was using capitalist principles of supply and demand to defend Obama collecting the speaking fee, along with getting paid $65 millions in his joint book deal with his wife, Michelle Obama.