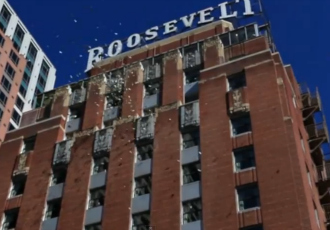 If you were an Occupy group that wanted to creatively protest the Supreme Court’s Citizens United v. FEC decision which prohibits the federal government from restricting corporate (and union) money as political speech, how would you go about doing it?

Before you answer that, let’s look at one way not to:

MicCheckWallStreet, a group within the Occupy Seattle movement, decided to show their anger at money in politics on Wednesday by… throwing $5,000 in $1 and $5 bills — stamped with political messages like “MONEY AS SPEECH SILENCES US ALL” — out of a hotel window in downtown Seattle.

The group asked, via its website, for donations to a wepay.com account. “Every dollar you donate is guaranteed to be thrown off a building and is tax deductible, what more could you ask for?!,” said the group’s website.

Claiming that “money is the new tea [ed. note: huh?],” the statement said that the event was “as much art installation as protest,” declaring that “it sends a powerful message.”

And what exactly is that message? Based solely on the action of throwing money out the window, one could guess it to be:

A) That money is the new tea (as in the Boston Tea Party — get it?), and so the group is going to throw it from somewhere as a protest because that money is unfairly taxed, or something?

B) That this group is feebly attempting nerdy commentary on economist Milton Friedman’s famous quip that the government could fight deflation by throwing money out of a helicopter?

C) That this group wants to make like Wall Street and take people’s money and waste it by just throwing it out a window, man, so that the little people can scrounge below?

The group claims the protest is an ironic (of course) statement “about money as speech by using money as speech; the money will naturally go back into general circulation.” Or more accurately: be used to buy more M&M’s… or fly off in the wind, whatever.

So with that in mind, how did it go?

The group’s video on YouTube doesn’t show the bills hitting the street below, but other footage on UStream shows a small crowd in an alley picking up some of the cash.

A bar owner reportedly collected $100 from his awning. One female tourist collected $14. And one other woman paid her bus fare with bucks collected from the sky. The Seattle Times reports that “wind blew some of the money onto a bar awning and into a nearby alley, sending people hunting for cash on windowsills and dumpster lids.”

So, let’s get this straight: the group protested corporate speech by giving away large sums of money to people (and bar awnings) who will likely use the bill for personal reasons, go about their daily lives, and do very little to overturn Citizens United.

“I’m going to have to say, ‘No comment,’ ” group member Emily Ravenscraft told the Seattle Times. “It will be explained.”

Just a tip: If you want to get your protest-bucks into circulation with your target audience, couldn’t you just hand the bills out individually on the street? Or go make a bunch of small purchases at Wal-Mart or some other evil corporate chain store where the money will surely circulate among the petty bourgeois consumerists who need to see your wake-up call to action.

But hey, if you continue to do this particular “art installation,” please do it next time from a New York City window under which I am currently walking. I could use the cash.

Check out the artful protest whatever thing below, via #MicCheckWallStreet: