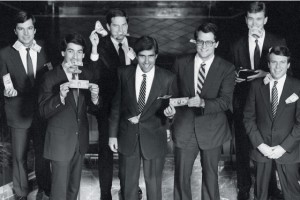 In the past several days, a bit of a feud has developed between President Obama‘s reelection campaign and the fact-checking website Factcheck.org over ads the Obama campaign released relating to Republican presidential candidate Mitt Romney‘s involvement in outsourcing at Bain Capital. The linchpin of FactCheck.org’s argument is that Romney had no involvement in running Bain after February of 1999, but a report from Mother Jones‘ David Corn casts serious doubt on that assertion.

Last week, the Obama campaign began running ads pegged to a Washington Post article on Mitt Romney’s tenure at Bain Capital, and his company’s involvement with companies that the paper described as “pioneers in the practice of shipping work from the United States to overseas call centers and factories making computer components.”

FactCheck.org leapt to Romney’s defense, alleging that “some of the claims in the ads are untrue, and others are thinly supported,” and while they used multiple rationales to defend Romney’s and Bain’s activities, the crux of their argument was that much of what the Obama campaign attacked Romney for occurred in the two years following Romney’s Olympics-based leave of absence from Bain, after which he retroactively retired.

Even on its face, this is a thin rationale. For example, FactCheck.org says that “In the case of ChipPAC,” a company that manufactured computer chips in Asia for US companies, “as the Post said, Bain announced it would buy the company ‘a month after Romney left Bain,'” as if that $550 million purchase magically poofed into existence the day it was announced. The same could be said of the numerous other deals that the WaPo article references, which occurred after Romney took his leave.

However, the Obama campaign quickly challenged even the assertion that Romney had nothing to do with Bain after February of 1999, sending FactCheck.org a letter that provided examples of documents and news accounts that seriously undermined the notion that Bain Capital simply vanished from Mitt Romney’s consciousness. FactCheck.org dismissed their complaints, but their rebuttal demonstrates some possible consciousness of guilt: (emphasis mine)

Much of the Obama campaign’s letter is devoted to quoting portions of documents filed with the Securities and Exchange Commission. In summary, the letter states there are “at least 63 filings with that agency after March 1, 1999 that list various Bain entities and describe them as ‘wholly owned by W. Mitt Romney.’” That’s true, but not relevant.

We have never disputed that Romney remained the owner of Bain while he was running the Olympics committee. The issue always has been, who was running Bain? Nothing in the SEC documents contradicts what Romney has certified as true.

However, the Obama campaign’s letter, which FactCheck published and linked to, includes multiple SEC filings that say this:

Maybe my grasp of English is a little shaky, but doesn’t “is the controlling person in Bain Capital” mean the exact opposite of “not involved in any way?”

What’s really weird is the way FactCheck almost takes on the role of Romney attorney, asserting that “If the Obama campaign is correct, then Romney is guilty of lying on official federal disclosure forms, committing a felony,” which is a factor of dubious relevance in assessing facts. A contradiction is a contradiction, and it’s not FactCheck’s duty to lawyer Mitt Romney out of it.

FactCheck later adds that “should Obama campaign officials discover any actual evidence that Romney personally participated in any management decisions at Bain after February of 1999, they should produce it to a federal prosecutor.”

The expired statute of limitations for perjury notwithstanding, this is merely a way of establishing a new burden for the Obama campaign to meet. The WaPo article shows outsourcing occurring while Romney was supposedly on leave, the Obama campaign produces documents that indicate Romney was involved in running the company at that time, but it’s somehow not incumbent on Mitt Romney to explain that contradiction, it’s the Obama campaign’s duty to produce a federal prosecution.

That brings us to the issue of Stericycle, which is not a manufacturer of really clean bikes, but, as Mother Jones‘ David Corn reports, is “a medical-waste disposal firm that has been attacked by anti-abortion groups for disposing aborted fetuses collected from family planning clinics.”

The Huffington Post‘s Sam Stein reported on Stericycle earlier this year, at which point officials at Bain Capital cited Romney’s leave of absence:

Romney’s relationship to the company, which was flagged by the Democratic opposition research group American Bridge and further examined through an independent review of documents, is tangential. By the time Bain Capital had made the investment in Stericycle, he had left the firm to run the 2002 Winter Olympic Games. He maintained ownership in Bain and kept holdings in its private equity funds, which included Stericycle stock, but he had no say in the managerial or strategic decisions at the firm, according to Bain officials.

The abortion connection doesn’t stand to damage Romney much with conservatives, though, who would turn out for Janeane Garofalo if it meant unseating Barack Obama, but what David Corn found further undermines FactCheck’s defense of Mitt Romney:

But the document Romney signed related to the Stericycle deal did identify him as a participant in that particular deal and the person in charge of several Bain entities. (Did Bain and Romney file a document with the SEC that was not accurate?) Moreover, in 1999, Bain and Romney both described his departure from Bain not as a resignation and far from absolute. On February 12, 1999, the Boston Herald reported, “Romney said he will stay on as a part-timer with Bain, providing input on investment and key personnel decisions.” And a Bain press release issued on July 19, 1999, noted that Romney was “currently on a part-time leave of absence”—and quoted Romney speaking for Bain Capital. In 2001 and 2002, Romney filed Massachusetts state disclosure forms noting he was the 100 percent owner of Bain Capital NY, Inc.—a Bain outfit that was incorporated in Delaware on April 13, 1999—two months after Romney’s supposed retirement from the firm. A May 2001 filing with the SEC identified Romney as “a member of the Management Committee” of two Bain entities. And in 2007, theWashington Post reported that R. Bradford Malt, a Bain lawyer, said Romney took a “leave of absence” when he assumed the Olympics post and retained sole ownership of the firm for two more years.

Among the documents that Corn turned up are several SEC filings that list Mitt Romney as “sole shareholder, Chairman, Chief Executive Officer and President of BCI, BCP VI Inc., Brookside Inc. and Sankaty Ltd.,” and as having “voting and dispositive power” over the Stericycle shares.

Contrary to what FactCheck.org says, it is Mitt Romney who has made seemingly contradictory claims about his leave of absence from Bain Capital, not the Obama campaign, and it’s up to Mitt Romney to explain them, or not.