Ed Henry To Adweek: ‘I Start Asking Tough Questions At Fox And Everybody Freaked Out’ 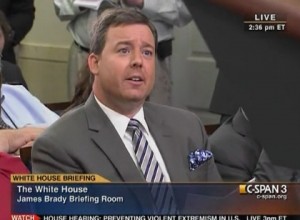 Henry even tackles the media buzz surrounding his switch to Fox News, sharing that he feels his questions are just as tough as when he was at CNN — it’s simply the reaction to his questions that has changed:

In answering a follow-up question about possible meddling on the part of the network, Henry makes an interesting differentiation between Fox News’ reporters — like Bret Baier, a colleague whom Henry seems to admire greatly — and the channel’s opinion news folks:

My first day at Fox, President Obama gave a prime-time address to the nation. That would have been a great chance for Roger Ailes or someone to say, “Hey, Ed, there is going to be a lot of people watching tonight, maybe you should hit Obama on this or that.” I didn’t get a phone call from anyone. I didn’t get an email from anyone. But what I did get was, we want you to be front and center tonight. I was on with Bret Baier, not Sean Hannity or some of the opinion anchors we have. Next morning ratings came out, and Fox had about 4 million viewers. CNN had about 2 million.

Then there’s the matter of Henry’s own personal reporting style which, he says, stems from his time as an “old print reporter” working under “Jack Anderson, the muckraking newspaper columnist:”

You had to write lively copy and cut to the heart of the story. I’ve heard from Roger [Ailes] and other people at Fox that one of the reasons they wanted to hire me was I have a sincerity that you can’t make up. I’m passionate and that has to come out. I love politics. I love breaking news, I love bringing context to big stories, and you can’t fake that. And I like to have a little bit of fun on air, and that is something Fox does better than anyone else.

Plus, the man can rock a Hawaiian shirt like none other.

Take a look at the full interview to get to know Ed, in his words.