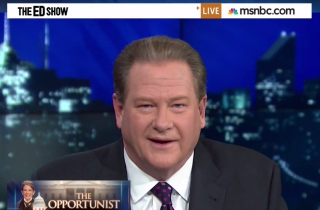 Ed Schultz is facing legal trouble against a man alleging that he breached a partnership agreement, a man who was reportedly responsible for shopping a Schultz-helmed TV show around before he ended up at MSNBC, and the lawsuit against Schultz is going forward after an appeals court reversed a judge’s dismissal.

Michael Queen claims in the suit he talked to Schultz in 2008, when Queen worked for NBC, about doing a TV show. He says he talked directly to Tim Russert about the show, gave Schultz an NBC tour, and helped film a demo reel for Schultz to show off to prospective networks.

Queen reportedly got Schultz a deal to do a show on a local CBS affiliate, but Schultz pulled out and ended up joining MSNBC. The question of a valid partnership agreement is at the core of this case.

Queen demanded his money, but all he got from Schultz was reimbursement for the studio rental fee plus interest. Queen sued for breach of contract, fraud in the inducement, tortious interference and intentional infliction of emotional distress. Schultz responded by counterclaiming for fraud, slander and libel. In August 2012, a judge rejected all of the claims on summary judgment.