Elena Kagan: Conflicts And Controversies The Cablers Will Be Talking About 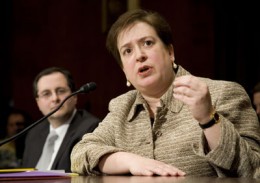 President Obama will announce this morning that his pick for the Supreme Court is Elena Kagan. And now that the speculation game is over (though truthfully, most presumed Kagan would get the nod), the spotlight will quickly shift to her confirmation process. So let’s take a look at the potential conflicts or controversies that might arise in the coming days, or put another way, what will the cablesphere will latch on to in the coming days?

At this point, it is generally agreed upon that Obama tapped Kagan precisely because of her middle of the road position (something that is infuriating Glenn Greenwald) in the hopes it would lead to a relatively easy confirmation process (relative being the operative word in this political environment.) However, there are a few points in Kagan’s history that are likely to be sticking points on both the left and the right and will probably merit extra focus on the cablers.

She has no judicial experience: Kagan has “served as a staff member in all three branches of government and was the first woman to be dean of Harvard Law School” but has never sat on the bench; the first nominee in more than three decades with no prior judicial experience. This gives her both a clean slate, meaning less “ammunition” for the opposition but also no paper trail meaning there is no comprehensive way to judge what her views. The latter is cause for worry, since Kagan as the youngest nominee ever (she’s 50) she will like be on the bench for a long time and shape SCOTUS over the coming decades.

She has stated she’s pro indefinite detention of prisoners without trial: This may be a big sticking point for the Left. During her solicitor general confirmation hearing last year Kagan told Sen Lindsey Graham that she “believed the government could hold suspected terrorists without trial as war prisoners.” This is the sort of statement that could send civil libertarians around the bend and might easily anger those on the left who are already unhappy Obama didn’t use his majority in Congress to push through a more liberal candidate. Her lack of paper trail will likely also come into play here, though it should also be noted that she has also supported detainees’ right to habeas corpus.

Even with two wars in progress, she contended, Don’t Ask, Don’t Tell should disqualify the US military from having any association with the school. “I abhor the military’s discriminatory recruitment policy,” she said, describing it as a “moral injustice of the first order.”

Eventually the Supreme Court dismissed Kagan’s arguments: “Souter, Ginsburg, Breyer and John Paul Stevens (the man Kagan would replace), all agreed with the majority decision written by Chief Justice Roberts.” Look for this to translate into Kagan not supporting the troops.

The Glenn Beck bonus: Kagan apparently wrote her thesis on “Socialism.” No doubt there’s a secret Maoist plot to be discovered in there somewhere.