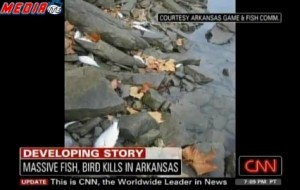 The town of Beebe, Arkansas suffered an eerie occurrence on New Year’s Eve last weekend: over 5,000 lifeless bird tragically fell from the sky. Impossibly, things appear to have gotten stranger in rural Arkansas as reports have surfaced of over 100,000 drum fish suddenly dying off roughly 100 miles west of the massive bird die-off.

As was reported earlier, an AP interview with an expert affiliated with the state’s Livestock and Poultry Commission suggested that the birds may have died as a result of “lightning or high-altitude hail.” Another possibility for the bird die-off? New Year’s Eve fireworks may have startled the birds so severely, that they died from stress.

But neither of these reasons would account for the massive fish die-off. According to the Associated Press report:

Seven teams from the state agency visited the affected portion of the river Friday. Commission spokesman Keith Stephens says an official estimate of how many fish have died is expected on Monday, but he tells the Arkansas Democrat-Gazette that the number is likely in the hundreds of thousands.

The commission determined the fish died in the river from a dam near Ozark to a bridge along State Highway 109 near Clarksville.

Stephens says some of the live drum fish were sick and will be sent to a lab at the University of Arkansas-Pine Bluff for testing.

Drum fish are bottom feeders that eat other fish and insects.

Watch the report and interview from CNN below: