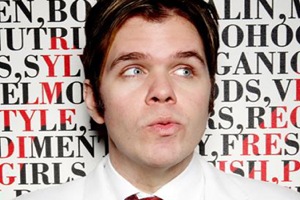 Celebrity blogger Perez Hilton runs a business based on trust– the trust of photographers that feed him photos, the trust of celebrities that give him the access that makes his site a must-read for those of the gossip world. It’s a trust of Teflon strength, surviving a series of questionable side projects, but with his most recent endeavor, UnratedPerez.com, Hilton may be definitively testing the immunity of his sources to outrage or insult.

The site seems to intentionally remain mysterious with an off shore registration that does not include Hillton’s name. But there is no doubt that he regularly links to and promotes it and at the least, Hilton seems to be happy to have his likeness and name on it as well.

No stranger to objectification, Perez Hilton takes the seediest elements of his flagship site and seems to expand on the Unrated version. Most of the website involves sex tapes– sex tapes with people who may have at some point interacted with someone famous, rumors of sex tapes of people famous for making sex tapes, sometimes even rumors of alleged sex tapes involving people of considerable public name recognition. More often than not, the “stars” of these alleged videos are women, either alleged mistresses, b-level stars, sex tape veterans like Paris Hilton, or jailbait celebrities of which there is very little indication a sex tape would exist (Miley Cyrus and Demi Lovato most prominently in recent posts). When not discussing sex tapes, Unrated Perez posts nudes and semi-nudes of similar type folk that have either leaked to them, the internet as a whole, or have been released professionally through Playboy or similar outlets. It is difficult to categorize the site– which requires age certification to enter– as catering in anything but pornographic fare, even the posts that simply speculate as to the existence of celebrity porn.

It’s enough to elicit a fair amount of finger-wagging for its raunchiness though, of course, the Perez Hilton ethos is one of outrage and, to a certain extent, eliciting disgust. It’s a world of shock, awe, and embarrassment, but as long as a whiff of self-promotion slips through and, as Lady Gaga may put it, the Fame Monster keeps getting fed, the relationship between Hilton and Hollywood is symbiotic. There’s very little symbiotic about the relationship between the celebrities embarrassed on UnratedPerez, however, and he who profits from it.

But perhaps the most bizarre quality of the site is its nearly exclusive catering to males. The celebrities (and non-celebrities) involved in most of the posts are women. The raunchy pictures more often than not feature females, with the occasional Clay Aiken boyfriend eye candy. Overwhelmingly, the site seems to cater to straight males, the demographic that most eludes the flagship site. According to Quantcast.com, only 37% of Perez Hilton readers are male, and while the statistics don’t show, one may assume that a majority of those males are not the kind to be waiting on bated breath for the the sequel to One Night in Paris.

Perhaps this is precisely the raison d’etre of Unrated Perez: to attract the one demographic its good twin has a snowball’s chance in hell of hooking. This would explain the sheer number of posts regarding either Playboy or porn powerhouse Vivid Entertainment– perhaps also serving as sponsors– but the site’s ethos seems to run counter to what is best for PerezHilton.com. First of all, if the majority of Perez readers are female, would they not be insulted by the obvious commercial objectification of women in the hopes of seducing men to read his site? Surely some outrage would be in order from at least part of this demographic that reads Hilton for his unique Microsoft Paint genre of gossip literature, or for his outlandish cattiness, but certainly not for anything remotely resembling misogyny.

Then there are the people being profiled on the site themselves. What incentive does a celebrity– an actual celebrity, not the alleged mistress of the housekeeper who once shared a room with Lindsay Lohan‘s cousin– who cooperates with Hilton have to work with him once he posts the most embarrassing photos he could find of that person or people they know on this extracurricular site? How does this site reinforce the trust that surely must exist between publicist and blogger for the show to go on?

Many will scoff at the idea of Perez Hilton and trust in the same breath, but a completely discredited media fiend could not build the empire Hilton has at his fingertips. His personal reputation may be shaky after a series of intra-media battles that did little to make him more appealing to the mainstream. If it is, however, it is deliberately so. It elevates his often childlike demeanor to something more, makes of him an enfant terrible that haunts the people much of America (and the world) loves to hate the most. His social relevance comes from entertainment value as much as it does from the pleasure of watching him innocently peeve the stars. Let’s face it: drawing on a celebrity’s face is innocent. Vulgar as it may be, it should do no harm to a person of average self-esteem to see their face with white dots on it. It drives celebrities insane. And from thence comes Hilton’s success.

Once Hilton crosses the line into legitimately humiliating content, that cheekiness becomes malice, and malice doesn’t sell. Cheekiness sells, but ill will goes nowhere. And just as it goes nowhere with readers, those that protect the names on whose coattails Hilton puts food on the table should raise an eyebrow or two at this new endeavor. That it’s devoid of taste or brain-stimulating content is expected. How UnratedPerez.com exists in its current form– devoid of levity or good humor in any form, is the media mystery to solve.