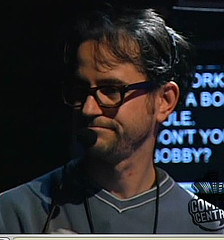 Over on Splitsider, they’ve got an interesting interview with Eric Drysdale, a writer for The Colbert Report who also helped develop that show as well as writing for The Daily Show before it. In it, he talks about what it was like when the show was first getting off the ground as well as some of the different approaches they considered but eventually dropped. As Stephen Colbert himself gave an interview a few weeks ago talking about his life when he was still struggling, it’s only fitting that now we have stories from a time when people thought the Report could actually be a failure.

Fans of the show will remember that Drysdale had a recurring role early on as Bobby, Colbert’s stage manager who was eaten by Colbert was Drysdale left the show for a while (As Colbert put it, he “tendered his resignation”). An interesting tid bit from the interview is that the Bobby character was added because the creators were concerned the Colbert character couldn’t carry a show by himself.

“ED: There was a small group of five of us [writers] – Allison [Silverman], the head writer, the [executive producer] Rich Dahm, and Stephen, of course. It’s amazing how dead on Stephen got it right away. I mean there are definitely things from those first couple shows that don’t exist on the show anymore, but, for instance, the “Word” on the first show, it’s very much like the “Word” now, to a degree– the format is the same. It happened really, really fast. And I give a lot of credit to Stephen and Allison –- they just knew what they wanted and made it happen.

And everybody was worried, “Is it too much Stephen?” and that was the reason I ended up on the show at first [as the character, Bobby, the stage manager]. We were doing these test shows, before the set was even built. We sat in the head writer’s office and the graphics guys came in with a computer with the graphics ready to go, and the videotape guys would come in with a videotape, and press the button when it was time to introduce a clip. So while that was going on, and because I was the only person in the room that he knew, he would turn to me and say “What do you think, Bobby?” and I would be forced to come up with something. So that became part of the show. Of course, as it turns out Stephen is perfectly capable of carrying a show, which I guess in hindsight nobody should be surprised by, but at the time…

We had this plan where we were going to have this backstage element to the show. And it sort of existed in the beginning but it became clear we didn’t need it, because Stephen is really good and people don’t mind watching him for half an hour.”

Drysdale wasn’t just there for the birth of the Colbert Report, he also first started at The Daily Show right at the beginning of Jon Stewart’s tenure when the show was making it’s 180° shift into full-on political mode. Drysdale explains how exciting that time period was.

All in all, it’s a fascinating interview and definitely worth a read for fans of either show.