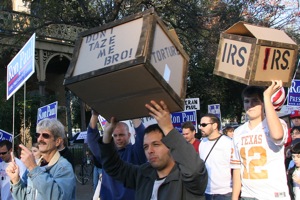 Now that the Tea Party movement has done enough to build conservative careers, some on the right are ready to shut it down. Erick Erickson, editor of RedState.com and CNN contributor, wrote today that he is giving up on the movement because it is being torn apart by attention-seeking pundits and public officials. Apparently no one told Erickson that the Tea Party movement was political.

His assessment of the tea parties, now that they are more popular than ever, is dire:

“The tea party movement, one year later, is descending into a self-parody of infighting, money making, claims of national leadership, protests, unions, federations, amalgamations, etc… the core message is gone and media and left have been able to seize on the discord and paint a picture of the tea party movement as something other than it is.”

He cites as the reason for this decline that the Tea Party movement is intentionally leaderless, and the more it grows, the more time it spends fending off would-be stewards instead of fighting the powers-that-be. Erickson’s solution is to end the movement before a single person becomes too powerful. Then he proceeds to list powerful people responsible for splintering the tea parties and announce his support of them:

On the one hand, Erickson is absolutely right in his assessment of the current state of the Tea Party. Opportunistic politicians are tearing into the movement like ravenous hyenas because, somewhere in its evolution from a Ron Paul splinter group to the core of the Republican Party, an essential part of its identity became not to have a leader. The social conservatives deliberately did this to harness the power of the Ron Paul movement without having to associate with, well, Ron Paul.

And now there is a vacuum that must be filled because a leaderless group is a powerless one in a republic where the only way to acquire power is to win elections. At the end of the day, it’s what happens in the election booth that counts, and if there are no leaders, who are tea party supporters going to vote for? To undermine that system by complaining that a political movement suffers from having leaders is to misunderstand the way a democratic republic functions. The problem with the Tea Party is not that they have leaders to begin with, but that, with increasingly frequency, self-proclaimed tea party leaders hold beliefs fundamentally opposed to the original mission of the tea party itself. Dissolving the movement in its entirety will not fix that problem.