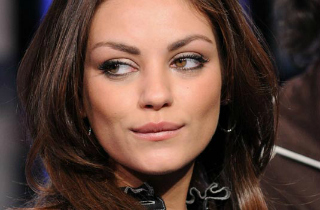 Forgetting Sarah Marshall star Mila Kunis may have just been given the title of “Sexiest Woman Alive” from Esquire, but she’s concerned with a lot more than maintaining a pretty face this election season. In an interview with the publication about a host of different topics, the 29-year-old celebrity said the “way that Republicans attack women is so offensive” to her.

“And the way they talk about religion is offensive,” the Ukrainian-American actress went on. “I may not be a practicing Jew, but why we gotta talk about Jesus all the time? And it’s baffling to me how a poor person in Georgia can say, ‘I’m a Republican.’ Why?”

Another thing that really boiled her blood? One of John McCain‘s senate campaign videos on immigration:

When told by the Esquire reporter that it’s unusual to hear celebrities talk about politics, Kunis said, “I don’t think I’m a celebrity. I’m a working actress. I think there’s a difference.”

One political figure she does like, however, is CNN’s Wolf Blitzer. The A-lister gushed about what it was like to encounter him at the 2011 White House Correspondents’ Dinner:

“I had the most incredible experience. Ever. I watch CNN or MSNBC all day long, every day. So I meet with Wolf, and I was like, ‘Oh, my God. There’s Wolf Blitzer.’ Like two drinks in, I just start talking. ‘So, about Ahmadinejad’s nephew …’ Wolf was surprised I followed politics.”