Pokémon Go has, literally overnight, exploded into a global phenomenon, and everyone wants a piece of it. Nintendo had resisted mobile platforming for so long, but this new game––which involves literal travel around the real world in search of Pokémon in an augmented reality––is attracting so much praise and buzz.

In fact, it’s so big right now that there are literally police departments warning people about the risks of walking into random places with your eyes glued to your phone. People have been hurt playing the game, and someone else found a dead body.

So, yeah, it’s been a big week for Pokémon.

Such a big week, in fact, that members of Congress are actually getting in on it:

Anyone else on #PokemonGO? I've found a #Squirtle & a #Pikachu in DC, but I'm still looking for a Republican willing to vote on #NoFlyNoBuy

Found an Exeggcute on the House Floor! Sorry, no pics allowed! #PokemonGO

And there have been all sorts of jokes about Hillary Clinton pandering to the youths with a reference to the Pokémens, but her opponents got there first:

Watch out world, there is a new #PokemonGO player on the scene. pic.twitter.com/RWr2jA5zUZ

And now we come to the Good News/Bad News section of this Pokémon phenomenon. First, the good news. The Marines have a pretty good sense of humor:

Get off the firing line, Pikachu! That's a safety violation! pic.twitter.com/WilmXFBHlf

And now for the bad news: the Westboro Baptist Church is using it too.

See, according to USA Today, the Westboro Baptist Church happens to be the location of a virtual Pokémon gym, so someone decided to take over the gym and call it “Love Is Love.”

When you bring sodomite lies to our virtual doorstep, we must get jiggly with it! #Pokémongo https://t.co/oxGGtR9Zqh

Using the Truth Edition cards to contend for the faith in the #PokemonGo arena! (Vine by @WBCVideo) https://t.co/xQp20YXkU5

And unlike the new Ghostbusters movie, behold something that will actually ruin your childhood: 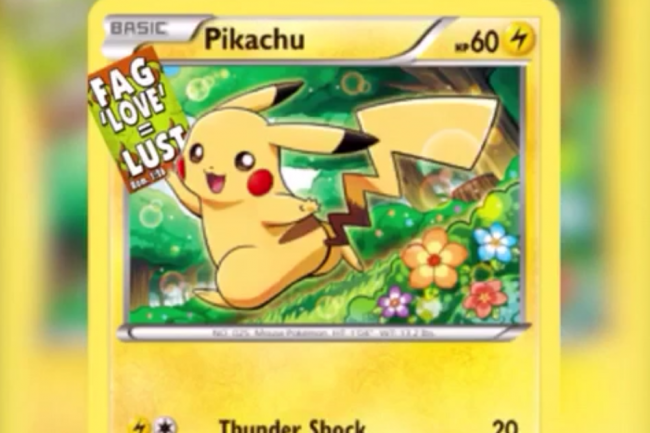