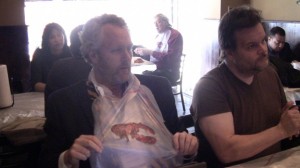 At last year’s CPAC convention, Andrew Breitbart and I had a much-publicized dustup over conservative dress-up artiste James O’Keefe (he of the undercover NPR “sting” video), concerning the racial overtones of O’Keefe’s choice to wear a pimp costume in the intro to his ACORN videos. That encounter didn’t go so well, but this year’s CPAC offered a fresh chance to discuss the issue. During a long lunch with Breitbart, liberal filmmaker Lee Stranahan, and liberal blogger Mike Stark, I finally got an answer to my question.

At CPAC 2010, James O’Keefe was something of a hot topic, having just been busted trying to run a scam on Sen. Mary Landrieu. When I approached Andrew Breitbart, he was fresh off of a heated encounter with liberal journalist Max Blumenthal over a story Blumenthal had written about O’Keefe. Blumenthal makes a habit of such run-ins, having previously tangled with John Ziegler and Michelle Malkin at prior CPACs.

Since Blumenthal and Breitbart had argued over allegations that O’Keefe is a racist, I decided to ask Andrew to respond to the criticism that O’Keefe’s choice of a pimp costume was racially charged. He was still pretty keyed up from his argument with Blumenthal, and I was struggling to be heard over the crowd of several hundred CPAC attendees that had formed around us, so the result, while entertaining, was not very illuminating:

The choice of the pimp costume served multiple purposes in the ACORN videos, one of which was to bait a trap for liberal defenders of ACORN, who would surely point out the symbolism of coupling such a stereotype with a primarily black organization. O’Keefe could then turn the tables and accuse them of being racist (as his friend Christian Hartsock did with me) for equating “pimp” with black man. Unfortunately for O’Keefe, he exposed his own pimp equation when he told Fox & Friends that he couldn’t believe anyone would think he was a pimp because “I’m the whitest guy I know.”

At this year’s CPAC, I had the rare chance to redeem my previous encounter with Breitbart, and finally get an answer to the question that ended our last interview. Breitbart, Mike Stark, Lee Stranahan, and I all had lunch at a crawfish place, and did about an hour-long interview, most of which I accidentally deleted while transferring it to my laptop. Fortunately, I was able to recover some of the footage, including our exchange over O’Keefe. While he doesn’t exactly agree with me, Breitbart does concede that a reasonable person could infer racial overtones if they “took it the wrong way.”

Mike Stark brings up an interesting point, the idea of a conservative “blind spot” on race. This is what I believe leads Breitbart to think I’m taking O’Keefe the “wrong way,” because he’s not factoring in O’Keefe’s history of racial antagonism. While in college, O’Keefe famously held an “affirmative action bake sale,” selling baked goods to minorities at low prices, while charging whites exorbitantly. Abstract object lesson, or expression of racial resentment?

Then, there was his satirical objection to Lucky the Leprechaun, a hideous equation of a character from Irish folklore with dehumanizing Sambo stereotypes. The fundamental problem with this sort of mockery of “political correctness” is that it trivializes very real, very reasonable grievances.

There are other hints at O’Keefe’s racial issues, such as his removal from a college dorm after he was accused of using racial slurs. O’Keefe said the accusation was a lie, but his writing about the subject contains some illuminating inconsistencies. He says he “volunteered” to move out of a room with a gay roommate, and was transferred to an “all-black floor,” yet he describes his two roommates on that floor (in strictly racial terms) as “an Indian who smelled like shit,” and a “Greek kid” named Paul. Finally, he bemoans the fact that he must defend himself to the dean, saying he was “forced to go in front of a black man,” the implication being that a black man couldn’t possibly act impartially in such a situation.

None of this is conclusive proof of what’s in James O’Keefe’s heart, but it does provide reasonable people with a means to judge statements like O’Keefe’s “I’m the whitest guy I know,” and decide whether it’s being taken “the wrong way.”

The other takeaway, of course, is that it is possible to disagree strongly with someone, yet still get along, and Breitbart certainly deserves credit for being willing to surround himself with liberals, and let the cameras roll. If there’s one thing we do agree on, it’s that a world where everyone agreed would be a very boring place.