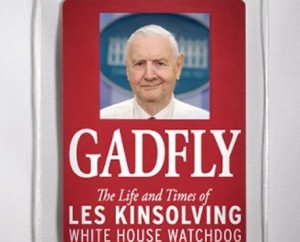 World Net Daily’s Les Kinsolving, now the 2nd most senior member of the White House Press Corps, is the subject of a new book by his daughter, Kathleen. I’ve written before about Les’ fascinating career, his outrageous questions at White House briefings, and interviewed him on some of his defining contradictions, but “Gadfly: The Life and Times of Les Kinsolving” reveals the rest of the chaotic iceberg that is Les Kinsolving’s life. In our exclusive interview, Les talks about some of those contradictions, defends his involvement with the South African Apartheid government, and pleads for a little social justice from Robert Gibbs.

Kathleen Kinsolving makes the right choice in taking a just-the-facts approach for the most part, letting the details of her father’s life take the starring role. Les’ story is one which needs little embellishment. If Robert Gibbs thinks Les gives him a headache, he ought to read about Les’ early career as an Episcopal priest, where he raised controversial questions about the birth of another leader of the free world, Jesus Christ.

I don’t want to give the whole book away, so I’ll just throw out some bullet points:

– Les was one of the first reporters to investigate Jim Jones, years before the Jonestown Massacre, but his paper only published 4 of his 8 expose´s when Jones’ followers protested.

– He’s a hero to the Birthers, frequently asking about the conspiracy theory in White House briefings, but he also caused a stir early in his career as a priest by denying the virgin birth of Christ, and the existence of Hell.

– A strident opponent of gay rights, Les inadvertently exposed the Reagan administration’s apathy about the AIDS virus when he asked about the epidemic in 1981, the first reporter to do so.

– Les’ daughter traces Les’ antipathy toward gay people to an incident wherein “Grandpa Walton” actor Will Geer made a pass at a young Les while at a summer stock acting camp.

-He’s pro-choice. Les persuaded Ronald Reagan to select questioners for a presidential news conference via a lottery. When Les was selected, he put Reagan on the spot by equating abortion rights with contraception.

Many people disagree strongly with Les, myself included, but he and his story are fascinating nonetheless. The main purpose of this interview is to let Les Kinsolving reveal himself, not to challenge his worldview. An interview like that would be hours long.

Here’s part one of our interview, in which we discuss that encounter with Grandpa Walton, and its effect on Les’ views: