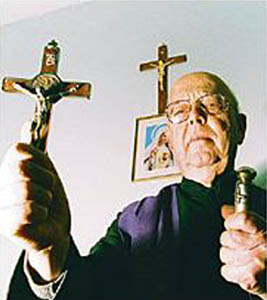 While we did imply that the New York Times was perhaps a little stodgy and definitely humorless only a few hours ago, we’re pretty sure calling arguably the most respected newspaper in the world satanic is going a bit too far. However, that is just what Italian exorcist Father Gabriele Amorth implied this week when discussing the recent battle between the media (led by the Times) and the Vatican over sexual abuse charges. The Catholic News Agency is reporting that Father Amorth has claimed members of the media were “prompted by the devil” in their attacks on the church.

“There is no doubt about it. Because he is a marvelous Pope and worthy successor to John Paul II, it is clear that the devil wants to ‘grab hold’ of him.”

While it presumably comes with the territory of the job, Father Amorth (who is apparently really good at making the same cinematic “cross as weapon pose” in every interview photo he takes) has been seeing the devil all over the place recently in regards to this story. Just a couple of weeks ago, he made headlines by proclaiming that Satan was at work inside the Vatican.

It’s possible that Father Amorth got in a bit of trouble with his superiors over those quotes. In that earlier interview, he also brought up the 1998 deaths of Alois Estermann, the then commander of the Swiss Guard, his wife and Corporal Cedric Tornay, a Swiss Guard and the supposed cover-up that was overtaken by the Vatican. Shortly after Amorth brought up these old charges, church spokespeople refuted any possible cover-up. One can imagine then, that this about face on where the devil is located and the glowing compliments about the Pope might be Father Amorth’s attempt to redeem himself a little. Or it could just be a smart way for the man to get a little work. An exorcist claiming that all of the media is under the power of Ol’ Scratch would be as good for business as if an exterminator told the army that Afghanistan is being run by raccoons.

Then again, you probably shouldn’t listen to us. We are a part of the media. Hell (no pun intended), the word “media” is right there on our damn (no pun intended again) masthead! Presumably then, Beelzebub could be prompting the phrasing of this article even as it’s being typed up. That would explain why the office is so darn hot today.