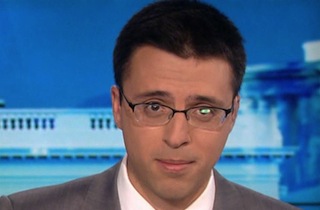 Ezra Klein, who built himself into an extraordinarily influential blogger while editing the chart-heavy Wonkblog at the Washington Post, is leaving for a new venture, according to a memo distributed by the Post Tuesday morning.

Klein, who joined the paper in 2009, is taking Melissa Bell and Dylan Matthews with him. Little is known of the new venture, save that Klein unsuccessfully pitched it to the Post’s publisher Katharine Weymouth and its new owner Jeff Bezos.

The Post will retain Wonkblog and its related Know More platform.

Klein is one of a couple high-profile bloggers to recently leave a major media institution, following on the heels of Nate Silver’s departure from the New York Times last year.

Read the Post’s full statement below, via Poynter:

We regret to announce that Ezra Klein, Melissa Bell and Dylan Matthews are leaving The Post for a new venture.

All three were instrumental in two of The Post’s most successful digital initiatives, Wonkblog and Know More. We plan to continue building those brands and expanding their reach, and we’ll have some exciting announcements related to them in the coming days.

When Ezra joined us in 2009, he was a wunderkind blogger with brash confidence and a burning desire to write a column in the print newspaper. As he leaves us, Ezra is still a brash wunderkind, but now his burning desire has a grander scope: He is looking to start his own news organization, an ambition that befits someone with uncommon gifts of perception and analysis. Ezra’s passion and drive will be missed, but we will take pride in watching him chart out his new venture.

Melissa has played a pivotal role in our digital strategy. As director of platforms, Melissa worked with the embedded developers to introduce WordPress as a secondary CMS, allowing for much of the development experimentation we’ve seen over the last year. She took over blog strategy and worked to hone the number of blogs and strengthen existing brands. She also managed to find time for some writing while here, driving our live coverage expansion, penning a Style column for more than a year, blogging for BlogPost and Style Blog and writing magazine stories. But her biggest strength is her personality, a combination of relentless determination and self-deprecating humor that helped her motivate young developers.

Dylan Matthews is a wunderkind in his own right. A blogger since middle school, Dylan had freelanced for Slate and worked at the American Prospect — before his 18th birthday. He started contributing to Wonkblog while still a student at Harvard and jumped in full-time in 2012. Last year he launched Know More, which was an instant hit. We will miss his humor and sharp instincts for what works on the Web.

Please join us in wishing Ezra, Melissa and Dylan the best and thanking them for their many contributions to The Post.