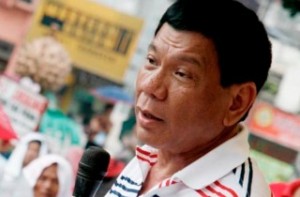 For those of you delightfully unfamiliar of the President of Philippines, let’s do a quick recap.

The man — Rodrigo Duterte — ascended to the highest role in the land this year on one of the harshest anti-drug candidacies in modern global history. He vowed once to kill his own children if they ever got mixed up in the world of drug dealing, and under his administration, thousands — yes, literally thousands — of drug dealers and users have been murdered by authorities under what many have claimed to be a blatant abuse of human rights this year alone.

He went as far as to say that children who lose their lives as part of his war on drugs are simply “collateral damage.” And yesterday, he claimed, “[Y]ou can expect 20,000 or 30,000 more [deaths].”

In his response, Duterte — who President Obama once called “a colorful guy,” — said, “I do not care what the human rights guys say. I have a duty to preserve the generation. If it involves human rights, I don’t give a shit. I have to strike fear.”

His salty language has become the stuff of legend. He has charged President Obama with being a “son of a whore” on numerous occasions, and famously lobbied the same label against the Pope. As in, the Pope is a son of a whore.

On the campaign trail, Duterte once infamously joked about the rape and savage murder of an Australian missionary who was visiting the Philippines. At the time, Duterte was the Mayor of Davao City, where the crime happened. He joked, “I was angry she was raped, yes that was one thing. But she was so beautiful, I think the mayor should have been first. What a waste.”

But now, are we prepared to see a different side of the man with the foulest mouth in global diplomacy?

After an official visit to Japan, Duterte told reporters yesterday, “While on up there on my way here, I heard a voice telling me to stop swearing or the plane will crash in midair, and so I promised to stop.”

He continued in apparent sincerity, “A promise to God is a promise to the people.”

However, the Atlantic was careful to make the following distinction:

But, the Philippines Daily Inquirer reported, that when he was pressed later whether he would stop swearing while talking about the U.S. or his political opponents, Duterte replied: It depends on the timing.

So, have we heard the last of Duterte’s colorful language? That remains to be seen. One thing I know is that his supporters abroad are vehemently in his corner as his anti-drug policies continue to sweep the nation, threatening the lives of thousands more with even loose affiliations to drug trafficking. Last month I produced an original video for Mediaite about Duterte and I got absolutely hammered by his supporters who caught wind of my handiwork. You can read the comments on the side of the video yourself to see just how supportive many of them are of his policies.