Effective Movie Marketing Strategy? The Stars Of The Change-Up Are Admitting It’s Stupid 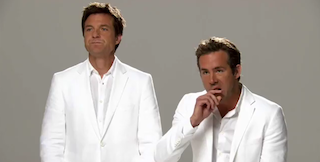 Here’s a kind of random question; What’s up with the marketing for The Change-Up? No, I’m not referring to those posters seemingly designed to insult both women and babies but rather the decision to have both stars, Jason Bateman and Ryan Reynolds, repeatedly talk about how stupid the plot is.

Movie marketing isn’t exactly an area we cover a lot here on the site but readers coming here mostly for politics should be interested in the one big crossover, talking points. Just like politicians (“kicking the can,” “taking the nation hostage”), anyone who follows the soul-sucking world of press junkets and talk show appearances can see actors repeating the same tired, studio-approved messages over and over again. In the case of this movie, the message just seems weird. To paraphrase, someone appears to have instructed Bateman and Reynolds to let the world know, “Yeah, this movie is just as dumb as it looks but it’s also really, really gross!”

I first noticed it during Bateman’s recent appearance on The Daily Show in which he informed Jon Stewart that, sure, body switch movies are old and boring, but this one was R-rated so that was different. It seemed, in Bateman’s skilled hands, to genuinely be an actor going off script to promote a slightly silly trifle. Bateman really is so charming that his admissions were refreshing.

Then, however, the studio released this viral video, and it became clear that this “off-script” conversation was as scripted as anything in the movie:

Now, for all I know, the movie really does transcend its plot (and, hell, I’ve always kind of enjoyed body switch movies), but that video really puts me off. Watching the two gifted actors having to pretend to “rebel” while clearly saying exactly what the studio wrote down for them is just painful. It’s “faux edginess with a clear agenda” reminds me of the immortal “No Adults Allowed” sketch from Mr. Show.

Still, while the marketing puts me off, I do find it pretty fascinating. Can anyone think of another movie that’s attempted to diss itself to sell it?