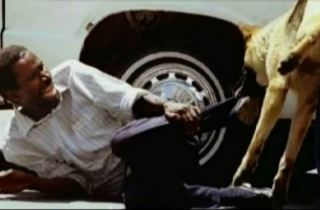 Multiple officers from the Fort Lauderdale Police Department have been fired after an investigation revealed they had shared a racially-charged homemade video and a series of derogatory text messages about black people — all while on-duty.

According to the New Times Broward-Palm Beach, officers Alex Alvarez, 22, Jason Holding, 31, James Wells, 30, and Christopher Sousa, 25, either resigned or were fired over their constant use of the word “nigger” and one message about “killing niggers.” Alvarez was also revealed to have created and shared a mock film trailer, using footage of his Ft. Lauderdale colleagues, that depicts President Barack Obama in a racially-charged manner and repeatedly drops the “n-word” along with images of Ku Klux Klan robes and black people getting attacked by rifle-toting white men and dogs.

First, a little bit about the messages:

In addition to racist statements about black people, Hispanics and homosexuals were also targeted, as well as coworkers.

Sousa was found to have texted, “Holdings we are coming and drinking all your beer and killing niggers.” Sousa later said he did it to “fit in” on the force, and that he regretted using the terms. He said his best friend since third grade is black.

Wells texted the word “niggers” and “nigger lover” dismissively and also “razzed” Alvarez by calling him a “faggot.” He called some of his coworkers “lazy fucks” and used the term “retarded brown.”

Wells later said that the texts were jokes — relief fro [sic] a stressful job, and that they were never intended to become public. He said they did not reflect his true feelings toward black people.

Holding once texted to Alvarez and Wells, after they’d been looking for some suspects who’d fled, “I had a wet dream that you two found those niggers in the VW and gave them the death penalty right there on the spot.”

He said that in that instance, he was just frustrated. He said he used the word “nigger” like women sometimes employ the word “bitch” — “Like, ‘I’m out with my bitches'” — or, he said, like it’s used in hip-hop as a substitute for the word “dude,” but that he regretted using it.

And that isn’t even half the story. Read the full New Times exposé if you want to know the totally bonkers way in which these texts and videos were revealed to investigators in the first place.

But as for the video, well… three of the officers said it was likely just Alvarez’s “regrettable attempt at humor,” but hoo boy is it totally unfunny.

Watch below, if you feel like getting angry today: