For Some Reason, Waffle House Is Asking Customers Their Thoughts On Whitney Houston’s Funeral 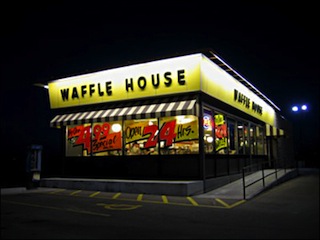 From the advent of social media, the marketing departments everywhere have been eagerly trying to get us human cattle to “follow” soulless corporations. And, why shouldn’t they? If there are people out there dumb enough to actively sign up to read McDonald’s PR messages (329,000 Twitter followers!) or “like” a soda brand on Facebook (who wouldn’t want to be friends with Pepsi?), why shouldn’t corporations exploit them? However, these attempts to get people to “engage” with brands sometimes get a little weird. Take, for example, today’s tweet from Waffle House in which they just wanted to know what people thought of Whitney Houston’s funeral. You know, like giant restaurant chains do.

The tweet was noticed by comedian and Twitter provocateur extraordinaire Joe Mande who declared Waffle House’s message a “hall of fame corporate tweet.” I can’t ague with that.

I remember the ancient times at the beginning of Twitter when I thought it was weird that people were following celebrities they don’t know in real life. I mean, why should I give a crap what Ashton Kutcher is up to right now? That thinking just seems quaint now that we live in a world where I can discuss every possible cultural moment with a waffle restaurant.

Oh, man! I should totally ask them what their thoughts on the GOP primaries are. What does Waffle House think about the tensions with Iran? Wait, that’s more of a global issue. I should probably tweet the International House of Pancakes to talk about that.

A couple decades from now, after the corporations have complete control of the planet and people go to war over brand names instead of countries, I’m going to look back and say that my favorite part of their bloody take over was when they hired 20 somethings to make them look friendly by using goofy hashtags.