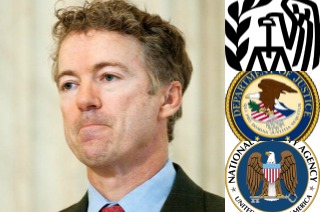 Democrats and their allies have comforted themselves with the notion that the Republican Party cannot reassume their role as a nationally viable party unless they get behind the passage of some form of comprehensive immigration reform. With the passage of any immigration bill, let alone a comprehensive one, appearing less and less likely, Democrats may be tempted to celebrate. They should restrain themselves. The revelation that the National Security Agency has overseen a data collection regime of unimaginable scale has given the GOP’s rising libertarian wing ammunition to hammer home an issue which they already own; a recalibration of the methods used to prosecute the war on terror. In concert with other abuses by federal agencies, the future looks bright for the Republican Party’s civil libertarians. If they frame it right, without attributing malice to unrestrained actions of the NSA, the Internal Revenue Service, and the Department of Justice, the GOP will not need to appeal to demography to win big in the 2014 and even the 2016 election cycles. A coalition of concerned independents, disaffected Democrats, and loyal Republicans of all races will hand Republicans a significant victories.

The public has not yet had a chance to weigh in with their thoughts on the breaking revelations surrounding the NSA’s snooping regime. Unlike in 2006, when a broad majority said that they were comfortable with the NSA’s collection of Americans’ telephonic communications data, the public is likely to be far more weary of the program in 2013. The remove from the events of September 11, 2001, combined with bipartisan outrage from members of Congress – as opposed to outrage limited primarily to partisan Democrats in the Bush-era – will yield a politically toxic environment for the old guard defenders of these program like Sens. Dianne Feinstein (D-CA) and Lindsay Graham (R-SC).

We know the public has already expressed dissatisfaction with how the Obama administration has handled the news surrounding the Department of Justice’s sweeping subpoenas of journalists’ phone records. 43 percent of respondents in a recent Rasmussen Reports poll said that the actions were intended to “intimidate the press.” 59 percent of respondents in a NBC News/Wall Street Journal survey said the scandal “raises doubts” about “the overall honestly and integrity of the Obama administration.”

In that poll, a majority said that “Republicans in Congress” are justified in launching an investigation into those events. This is a major shift – Republicans in Congress are about as reviled a group as you get. That their actions are not immediately dismissed as partisan and illegitimate is grounds for Democrats to be nervous.

The NBC/WSJ poll’s numbers for the IRS scandal are even less encouraging for supporters of the Obama administration with broad plurality attributing the targeting of conservative groups to a “more widespread effort” to hamper the political activities of Americans on the political right.

Enter the GOP’s libertarian wing and their most vocal member, Sen. Rand Paul (R-KY). Paul’s one man show in March, in which he captured the attention of the nation when he mounted an old fashioned talking filibuster to raise awareness of the scale of the White House’s drone warfare program, elevated him to national prominence. Already, the media has started looking to him to lead a pushback against the administration’s curtailment of civil liberties.

That is not to say that this campaign, like any campaign, is not fraught with pitfalls. The argument must be framed in such a way that it does not ascribe intentional malice to these abuses by federal officials and certainly not the White House. This latest government overreach, the argument goes, is the inevitable result of a government that has grown too large to be managed by even those with the best of intentions.

The counterarguments, that FISA courts should be under review and an independent counsel should be appointed to look into overreach and abuse by DOJ and IRS officials, are bureaucratic and less than compelling.

When Paul mounted his filibuster, I wrote in this space that he broke the liberal monopoly on romance. His dramatic effort in defense of personal freedom against a leviathan government enjoyed an inherently idealistic quality – and many constituencies that do not traditionally vote Republican are moved by idealism and romance. The NSA, DOJ, and IRS scandals, indicative of an insular and parochial culture in Washington, are tailor made to appeal to hearts of a majority of Americans. They evoke to the very themes enshrined in America’s founding documents.

While it is possible that issuing political attacks on the apparatuses which can and have kept Americans safe in the post-9/11 era is unwise, it is clear that they can be politically effective. The GOP’s libertarians can peel off a variety of currently Democratic constituencies by framing theirs as the party of civil liberties.

Democrats should be nervous. Republicans can and probably will argue that it is time to move on from the counterterror tactics of the Bush-era. Democrats will argue the opposite. One of those is a politically untenable position.