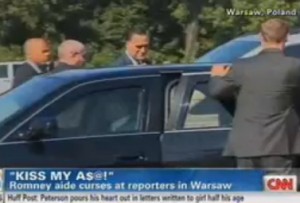 On Tuesday morning’s Starting Point, CNN aired video of Mitt Romney traveling press secretary Rick Gorka telling reporters “Kiss my ass!” as the candidate ignored shouted questions following a visit to Poland’s Tomb of the Unknown Soldier. While news anchor Zoraida Sambolin introduced the incident as another “hiccup” in Romney’s foreign trip, along with Romney controversies in Great Britain and Israel, but given the circumstances, it hardly qualifies.

As we reported earlier, Gorka was responding to reporters who were shouting questions at former Massachusetts Governor Mitt Romney as he departed a visit to Poland’s Tomb of the Unknown Soldier, and who were complaining of limited access to the candidate during the trip:

This is a classic case of two sides each having a legitimate point, yet each undermining that point in their expressions of it. The reporters have a legitimate gripe with the way the Romney press operation has restricted access to the candidate during this trip, and with the candidate’s longstanding avoidance of reporters’ questions. Being an embedded reporter with any campaign is inherently frustrating, but doubly so when the candidate and his press operation take extraordinary measures to ensure that there’s nothing to report.

However, they chose the wrong time and manner with which to take a stand. The fact that they were covering a visit to a solemn site, to be clear, doesn’t necessarily make it wrong to shout questions, but it raises the bar on the content of those questions. If they had needed Romney’s reaction to some breaking news development, for example, reporters could be forgiven such behavior, but hollering a question about his gaffes? On a good day, while exiting a Chuck E. Cheese’s, what’s the best they’d expect from Romney? “You’re right, I’m the ED-209 of gaffe machines, I hereby quit the race?”

Gorka’s reaction, which he later apologized for and called “inappropriate,” was entirely warranted on a human level, and I’m frankly a bit surprised that none of the reporters (as far as we know) joined him in urging a smidgen of respect. Yes, he undermined his point by using profanity while urging people to show respect for the dead, but the provocation was heavy. He deserves to be cut some slack in this case.