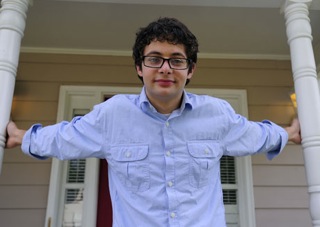 Remember Jonathan Krohn? The former conservative wunderkind was one of the bigger hits at the 2009 Conservative Political Action Conference, releasing a book about his conservative philosophies and aspiring to go to Princeton. Politico caught up with him this week, now 17, and found that, like many young people, his political views have changed, drastically, and he has no interest in ever writing a political book again.

Asked about his past as a conservative stalwart, Politico describes Krohn as “cringing,” explaining that he thought of himself as “naive” and was “inundated with conservative talk” as a child. “You’re really defeating yourself if you think you have all of your ideas in your head when you were 12 or 13. It’s impossible,” he explains. He adds that he is neither liberal nor conservative because “I’m tired of being an ideology,” so instead Politico does an issue rundown:

Gay marriage? In favor. Obamacare? “It’s a good idea.” Who would he vote for (if he could) in November? “Probably Barack Obama.” His favorite TV shows? “The Daily Show” and “The Colbert Report.” His favorite magazine? The New Yorker. And, perhaps telling of all, Krohn is enrolling this fall at a college not exactly known for its conservatism: New York University.

He credits Nietzsche, Wittgenstein, and Kant among others for his conversion. “It was really reading philosophy that didn’t have anything to do with politics that gave me a breather and made me realize that a lot of what I said was ideological blather that really wasn’t meaningful,” he explained. He notes he plans to study philosophy in college.

He is also frustrated with the fact that people still see him as the famous child he once was. “I have to explain to people over and over and over again that I’m not a conservative and I have my own ideas and I’m not just agreeing to everything that every conservative said,” he says. “It’s very hard to break a stereotype like that of yourself.” He notes his career in punditry suffered for the change, but now that he is 17, he doesn’t seem have that aspiration anymore.

Watch his 2010 CNN appearance below: